What a day! Because it was chilly last night, and they were still a little damp,  I brought Leah's kids into the house and left them in the dog crate, which sees more use for kids than it does for the dog.  I gave them their last feeding around 11:00 and rose this morning around 6:00 to feed them.  Snowball took her bottle easily, but Oreo resisted.  Yesterday, she'd been the one that grasped quickly what that bottle was about, but I couldn't get more than a few slurps out of her.

Around 11:00, a friend came over, a retired nurse.  She's my Visiting Teacher from the Church, but first and foremost my friend. Another friend and neighbor showed up a few minutes later.  "Hey!" she cried, "where are the kids?"  Just in time!  We fed Snowball, no problem, 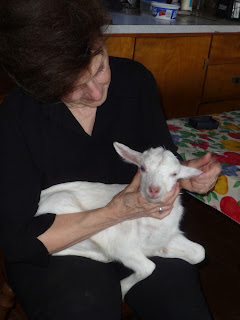 and then she curled up under Marylee's chair. 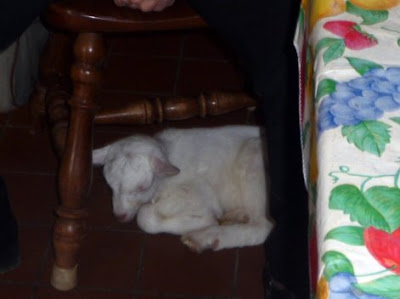 Oreo just didn't seem interested,though, even when Laura, who has raised many a lamb, tried to coax her.  After Laura left, we sat there discussing what I could do to get her to eat, while my mother held her close.

Marylee says she really comes over to see "her" kids, so I decided to put her to the test. "Okay," I started, "you must have put in feeding tubes when you were nursing, right?"
"Sure," she replied.
"Would you show me how to do it?  I really think I need to tube feed this kid.  She refuses to eat."

After some conversation about what I'd need, I realized I had a tube feeding kit in the barn, unopened, one of those things I have in my kidding kit "just in case" and hope I ever have to use.  We watched a couple of videos on how to do it--she probably didn't need to watch them, but it made me feel better--and then I held Oreo while Marylee inserted the tube and fed the kid 2 ounces of milk.

That must have kick-started her little system.  I took them out to the barn to the big stall where they had room to play and a corner to snuggle in.  When I came out again 4 hours later, Oreo was ready and willing to nurse.  Yay!

Happy endings.  That's the way life's supposed to be.