When I was 21 and newly married, we moved from California to Iowa, where my husband had grown up.  One of my fondest memories is the fields and fields of yellow, dandelion carpets stretching across the landscape.  Originally planted by the Amana society, the dandelions were used for dandelion wine.  How could people say that dandelions were pests and weeds?  Just look how lovely they were!

Later I learned that the much-maligned dandelion, Taraxacum officinale, is a wonderful food, herb, and medicinal plant.  I've been eating dandelion blossoms and leaves for years.  I love the slightly bitter leaves in a salad or steamed like spinach.  The flowers are wonderful sautéed with beaten egg and feta cheese, or stir-fried with fresh asparagus and fiddleheads.

We have a bumper crop of dandelions this year, and the flowers are both copious and large. 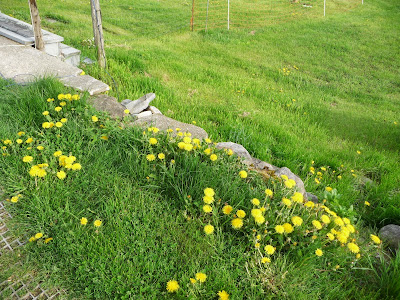 I picked several earlier this week that spanned two finger-widths.  I say I picked them, but actually I snipped the petals with as little of the sepals as I could manage, and filled a large bowl full of petals, all for the joy of dandelion blossom syrup.


If you've never had it, you have missed one of life's little delights.  Many recipes call for lemon or orange peel and juice; I prefer just the taste of the dandelion itself, so I leave out the citrus. It took about a half hour to fill the bowl, but the time was spent in the afternoon sunshine on a warm and breezy May afternoon, and I got to watch a native bee buzzing from blossom to blossom gathering pollen as I gathered flowers.  I had a bee's eye view, one might say. 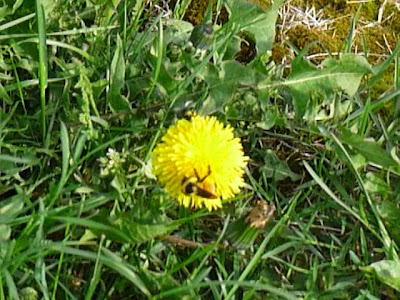 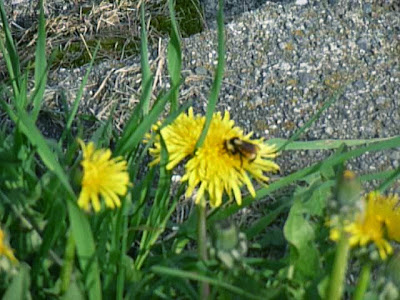 Once I had enough, the petals were covered with water and brought to a boil in a gallon pot, then covered and left to steep overnight.

This morning, I drained the blossoms in a sieve, squeezing the petals of all their liquid. 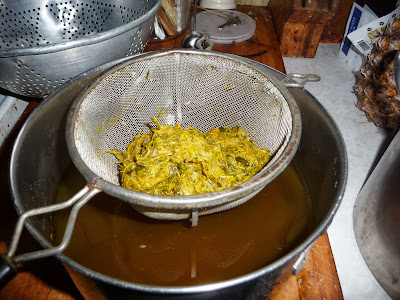 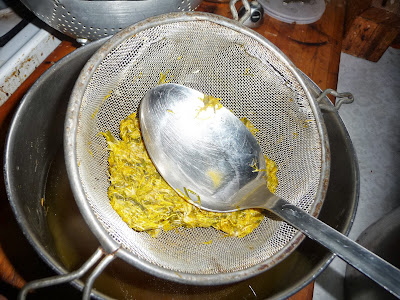 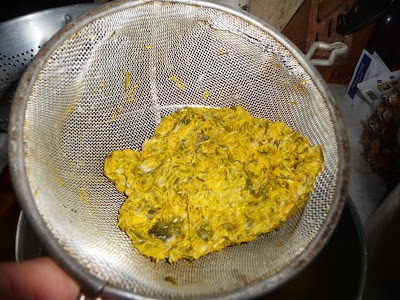 I measured 82 ounces of the liquid by weight, added the same weight of evaporated cane syrup, and heated it slowly while I stirred the sugar 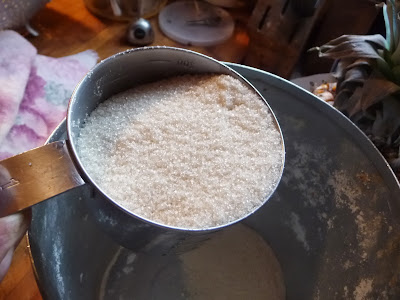 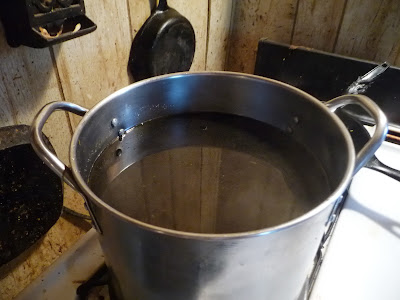 Once it reached a boil, I let it simmer for 2-3 hours, until it reached about 215° F, a nice rich syrup, then hot packed it into jelly jars.  Of course, I left a jar out for immediate use, but oh! it's so nice to see that syrup lined up and waiting! 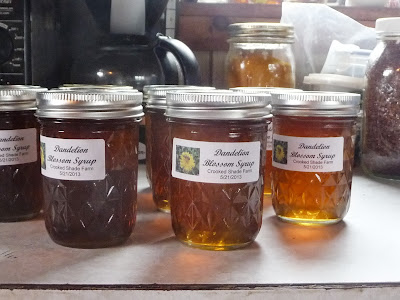 Dandelion Blossom Syrup is delicious. It's hard to describe the taste, at once light and sweet. One friend that I let try it says "It tastes like sunshine."

The next day I made another batch.  Good thing, too, because the day after that the rains came, and they're staying for a while.
Posted by Joy Metcalf at 10:18 PM 2 comments:

43 years ago today, 4 students were shot down by the National Guard on the campus of Kent State University, Ohio.  I will never forget the stunned disbelief that I felt, and 43 years later, if feels like yesterday.  So much has happened since then, so much government corruption and power grabs.  As I sit here tonight, I hear Eric Holder saying, in answer to the question, "Will our troops ever fire on U.S. citizens?", "Absolutely not."  But it has already happened.  I hear the voices of government saying, "The Military Commission Act is not going to apply to U.S. Citizens", but that, too, has already happened:  The Boston bomber is a naturalized citizen, entitled to a civilian trial, not a military trial.  Should Timothy McVeigh have been labeled a terrorist and denied a trial?

As I remember the Kent State shootings, I'm heartsick.  Too much has happened, too much liberty lost.  Lest we forget, lest we forget...

They're cute, no doubt about it.  There's probably nothing cuter than a bouncing goat kid, except maybe a few of them together.  However!  There's only so many times one can be jumped on before it gets very old, very fast.  I mean, these kids are going to grow up to be full size goats, and what's cute now will be downright dangerous then. This week was training time for kids.

Every time they came near, my knees came up, I wiggled and squirmed, and I'm sure if someone had walked in unannounced, I'd have been a sight.  It took a few days, but my babies are learning that I'm not one of the herd and they can't jump on me without repercussions.

Kids grow quickly.  It's hard to believe they were tiny, tottering babes less than four weeks ago  They're into everything, and since the gates have wide gaps, they're out playing everywhere.  The large stone at the edge of the yard is a favorite.  Can we climb it?  Or can we not?  Up they race it to see if they can reach the top, balancing precariously before losing their balance and jumping (or sliding) off.


They've become the unofficial welcoming committee for all visitors to the farm, and most of the time the world is their oyster.  What?  Stay in the paddock or pasture with the others?  Don't be silly!

That's not to say they're always out.  No, there are alllurements within as well.  It's wonderful just how attractive a wooden pallet can be for a tired kid. 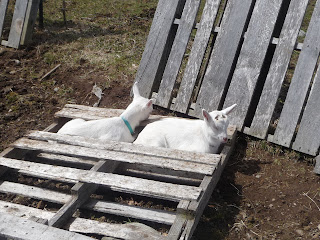 Posted by Joy Metcalf at 6:12 AM No comments: