It's mid-May already, and I haven't planted the garden yet. The fiddleheads are almost past! Where has the time gone? As usual, spring is galloping along faster than I can keep up, and time, that awful thief, is picking my pocket once again.

But since this is my first blog entry, it seems only fitting that I should introduce all the furred and feathered inhabitants of Crooked Shade Farm. 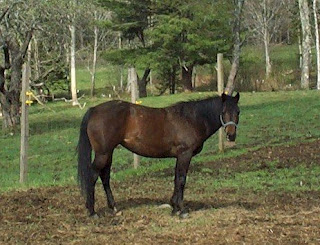 First, the two horses, Winsome Angel (aka Angel), my Arabian X mare, 18 years old, the matriarch of the farm animals. Angel's been with me since she was two, and we've learned a lot about life and each other in that time. She's my "everything" horse, and she does it all: trail, dressage, jumping, barrels, pole-bending, and even vaulting. What she likes best, of course, is being a pasture ornament, and she does it well.

Pyxylated Magic, Angel's daughter, is in the D registry of the American Trakehner Association. I used to call her Pyxie, but, believing that beings grow into their names, I decided I didn't want to encourage her naughty ways. Magic is still somewhat of a brat, but I have high hopes that she will truly be a magical being as she grows older. 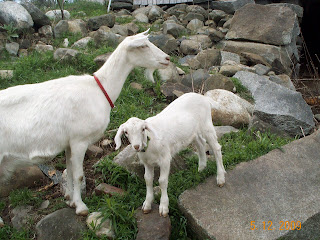 Next come my three goats. Beatrice is a 2 year old Saanen doe, and freshened for the second time in March. Her buckling left shortly after, having been traded for pruning of a couple of apple trees, and now facing a longer and better life than he would have had otherwise. The same day, I brought home a little Saanen/Nubian doeling, born on the same day as the buckling. Sanuba is the inquisitive, feisy one of the group, always greeting the horses on hind legs, or challenging the roosters.  Sanuba and Magic are best buds.  Angel isn't so sure she really likes having them around.  Perhaps that will change as time goes on.  Angel is usually pretty easy going.


Two weeks after Bea kidded, I bought another little Saanen doeling, Emily. Honestly, Emily told me that was her name. I actually had no intention of taking her home, being more interested in a larger doeling that was posing just like a little show goat, but I picked up the little doeling that kept coming over, just to see how far along I could expect the horn buds to be developed on all of the doelings of that age, and suddenly I heard the worlds coming out of my mouth, "I guess I'll take this one." 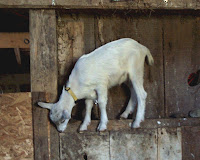 Emily is the climber. I find her in places that the others don't even think about, and I've had to take a serious look at what she can reach in the barn if given ample opportunity.

And talking about Emily, it's time to feed her, so I think I'll finish this later.
Posted by Joy Metcalf at 12:14 PM No comments: