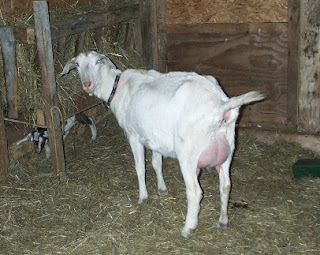 Sanuba has a new home.  It was hard to part with her, but I'm back to four does, now, including Cassie, Leah's Sable kid, but I feel very good about Daryl, and I think Sanuba will be loved and appreciated.  And probably, head honcho, as she was here. ( A little trivia here:  Did you know that honcho derives from a Japanese word meaning "squad leader"?  Little did I suspect...)

Beatrice's bucklings are going to a good home, together, as wethers, which makes me happy, since I hate putting kids in the freezer.  I just don't eat enough meat to make it worthwhile, and it's hard to butcher an animal that I've gotten to know. Since they're not bottle babies, I haven't spent as much time with them.  Since I'm separating them from Beatrice at night, I've been going into their stall and getting to know them.  They've quickly lost their skittishness and have discovered the jos of scritches and scratches.