The day dawned bright and cold, with only a little wind.  Yesterday’s gales had packed the powdered snow into swirls and eddies,, drifts here and bare spots there.


I dug my way to the barn last night and finished the job this morning.  A high drift sits just in front of the side door of the barn, 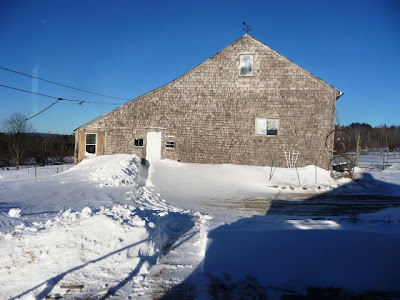 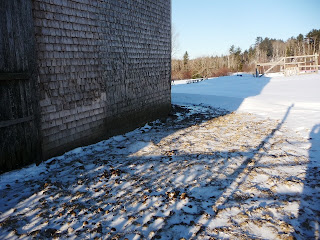 while the wind completely cleared the area in front of the big doors, so that when I opened them, the horses were able to go out onto dry ground.
I should have put out the hay in the barn before I opened the doors, though, because Magic immediately headed for the gates and the space under the barn, Angel following slowly behind her.  The goats, too, were happy to be out.  I put out some hay and returned to the house.

Later, after the driveway had been plowed, I went out again to clear the pathways, check on the poultry, and see if the horses had returned for their hay.  They hadn't, and the goats had followed.  The only response when I called was nickers from under the barn.  Oh well.  Out I tromped through the snow, hoping they'd made a good enough path that I wouldn't sink in.  Wishful thinking!  I struggled through the deep snow until I got to the rise above, Zoë ahead of me, struggling through .
A huge drift blocked the barn area, but all was clear before it.  Why they plowed through that drift to get underneath is a mystery to me, but there they all were, goats completely underneath, and horses on the outside edge. I called again and Angel pushed past Magic, eager to follow me and return to the barn.  I scooped up Zoë so she wouldn't get trampled, for now Magic bounded up, scattering snow everywhere.  She danced back to the barn, shaking her head in high spirits.

I left them there and came in.  The goats turned up eventually.  They had to brace themselves for the trek back, and hugged the clear area by the barn. 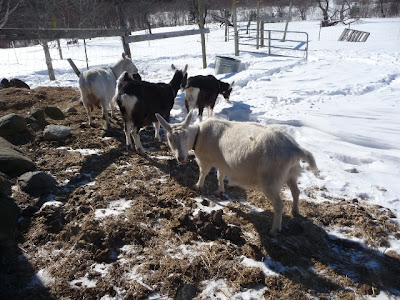 Snow is rumbling off the roof in small avalanches.  This week's forecast is for warmer weather and rain.  Everything will turn to ice at night and make it impossible to walk or drive.  I can hardly wait!

I awoke at 4:00 this morning, remembering that I hadn't stashed any emergency water rations.  Down I came and checked the situation.  In the basement were 2 filled 5-gallon containers, and 3 empties.  Upstairs they came, and I spent the next 45 minutes cleaning and filling.  But first, Zoë had to go out.  Well...she thought she did. I flicked on the light and opened the door to find the outside hallway filled with snow.

Zoë looked at it a moment and headed out the second door to the outside.  It was comical to watch:  she trotted about 3 feet and, without missing a beat, trotted back in the door.

After filling the water containers, it was 5:00, almost time to get up anyway, and hallelujah of all hallelujahs, we still had power!  Okay, with the wind howling outside, rattling windows and blowing snow, that might not last.  I turned on the coffeepot so my mother wouldn't have to do without if we lost electricity, and engaged my brain.  It was cold outside.  Thinking about that, I decided to bake some bread and some eggplant Parmesan that I'd been planning for tonight.  Keep the oven going, and at least the kitchen would stay warm.  I mixed together whole wheat bread and put it aside to rise, and then mixed up pita bread dough.  I love fresh pita bread stuffed with salad, and kept that vision in my mind as I rolled out the pita circles.


Around 7:00 Zoë asked to go out again.  Same scene, but this time she sniffed the air before she quickly turned and scooted back through the door.  It wasn't until 10:00 that she gave up the fight and stayed out long enough to relieve herself.  Poor mizzable dog!  She was not a happy camper, and neither was I, for I couldn't put off going out to the barn any longer.  I put on two pair of socks, two pair of sweat pants, heavy boots, a  heavy jacket, gloves, hat, and earmuffs, and ventured forth.  All the snow that should've been outside the door was actually inside the door, so the first few steps were clear; then I descended into ever deeper snow drifts, until I was knee deep and struggling to get to the side door of the barn.  No drift against the door, though!  The wind had blown it all away about 6 inches from the door.

Oh, the shock when I got to the horses!  They were covered with snow, and there was a 2 foot drift against the door of the hay stall!  Slush covered the top of the stock tank, and snow had even blown into the milking area.  Worse, three of the goats were running around.  I thought I'd locked them in their stall, but either they know how to open a slide latch, or I completely missed that one.  I filled their feeder with hay, dumped some Chaffhaye into the round feeders, and secured them.

Magic, bless her cotton-pickin' little heart, had dumped the horses' feeder on the ground and pushed it around the floor.  She's such a darling that way.  Once all the snow was out of the way, I filled their feeder,, made sure the other goat stall was copacetic, and headed back to the house.
The wind is supposed to let up sometime tonight.  It's still snowing, still drifting.

So far, we haven't been plowed out, so maybe we'll be farm bound for another day or two.  At 3:30 in the afternoon, we still have power, so it looks like all that preparation worked.  I still need to bake the whole wheat bread but I'll do that soon.  I have some other things I want to do first, like write this blog and then kick back for a bit.  I don't mind snowy weather one bit if I don't have to be out in it.
Posted by Joy Metcalf at 5:35 PM 1 comment:

The ghost of winters past

With all the brouhaha over the impending storm, I''ve been trying to find out just how much we might get here.  While looking on various websites, I found this reference to the infamous Blizzard of '78. Hoo boy! Do I remember that one! I lived with my 8 year old son in Canton, Massachusetts, a mile from Route 128.

Sometime during the storm, I heard a knock on my door and opened it to find Scott, our church home teacher, and one of his employees, who'd gotten stranded on 128 and walked to my house. Scott managed to call his wife before the phone went out, but they were camped out on the floor until the storm blew over and the streets were somewhat cleared. 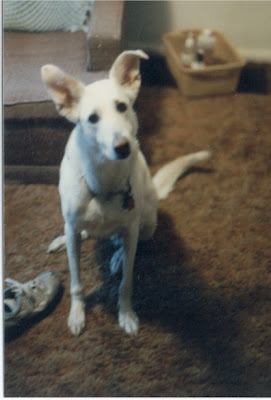 The next morning, my dog Jody needed to go out.  I opened the back door--which, thankfully, opened inward, for we found a drift across the door leaving scant inches of daylight at the top.  Poor Jody! She was practically standing with her legs crossed by the time we got the doorway dug out.  Finally, out she went--a white dog, all that showed were her eyes, two black dots bounding across the snow.

Scott and his friend dug out my front and back and, as I recall, they set out for home, by foot, as soon as the road was plowed enough to allow foot travel.  It took a week for 128 to be cleared and traffic to be allowed even on the local roads.

As I look back on it, it was a cozy time.  Neighbors got to know neighbors, and we walked everywhere.  The snow was piled high, but so were our spirits.

My first winter in Colorado brought with it another blizzard.  I was snowed in for days, loving every minute.  I dug my way out to the barn, fed and watered the horses, and gloried in the beauty of the snow.  Everyone who had a tractor pitched in to dig out everyone else.  My little Ford 9N was busy, busy, busy as I drove it here and there, the brisk air brushing my skin, my cheeks flushed and rosy.  Snowmobiles were everywhere, collecting people who couldn't get home, bringing supplies to those who needed them, everyone helping everyone else.  Afterwards I set up my watercolor easle and painted, the sunlight streaming into my living room.  It was a glorious time!

I'm older now and the thought of a blizzard both warms and chills my heart.  Since we don't have a wood stove here, if the electricity goes out, it will become mighty cold.  the storm is supposed to start sometime tomorrow night, so I'll lock the horses in the barn, the goats in their stalls, make sure there's plenty of hay and water available, and put my truck out of the way of the plowing.  If we lose electricity, it shouldn't take too long to set up the generator--once I get a path dug.  Then I think I might just dig out my sketch pad.  Blizzards bring out the best in me.