On milk, homeopathy, and herbs

Sanuba, bless her pea-pickin' little heart, is up to a quart a day of milk--and what wonderful milk it is! Sanuba, as her name implies, is Saanen/Nubian cross.  My other milker is a full Saanen, and though Bea gives delicious milk, it's low in fat. Sanuba's milk, on the other hand, is rich and full of butterfat.  I can actually skim it right off the top the next morning. Yum!

Sanuba's doeing is already gone, sold at a week old, and her buckling is happily playing outside with the others, dodging horses' feet, investigating geese, and generally taking life as it comes.


I'm milking Snub (Sanuba) three times a day, not because she has such a huge quantity of milk, but because we're still battling congested udder. I've been working with Glen Dupree, a homeopathic vet in Louisiana, to resolve this, and we're definitely making progress.  From one teaspoon of milk, painfully (for me) extracted, she has increased steadily to a little more than a quart today.  Her buckling is getting all he wants, as well, and I'm sure he's consuming at least a quart or more a day.  This has been a long road for both of us.  I've been massaging her udder at every milking, applying hot and cold packs twice a day, giving her herbs, Ester C, and homeopathic remedies as directed, and though she's much softer and more pliable than before, we still have a way to go.

Today I got some udder salve and herbs from Fir Meadow to add to the protocol. I like Kat Drohval's products, and my goats eat them readily.  Her BWW Wormer is great. In combination with GISoother, it's kept my goats from being plagued by parasites.  The GI Soother targets Haemonchus contortus, a particularly nasty worm that Beatrice contracted from the sheep that was here when she got here.

Emily has already started to bag up a bit.  I thought her due date was May 30, but I'm thinking perhaps she actually had a false heat?  No wonder my goats keep me crazy!  They won't even let me know when the buck is no longer of interest!  At any rate, after Snub's surprise pregnancy, I'm going to be prepared for both a May 9 due date and a May 30th.  I hope she has bucklings so I don't have to pull the kids. CAE positive does do take some management, no doubt about it.

Leah is also bagging up, but the earliest date for her would be May 29th. Let's see now--I bred her because I wasn't sure anyone else had been bred, is that right?  From now on, I will not assume that no one's been bred, even if they're tail wagging to beat the band, batting their eyelashes seductively at the buck, and blatting their heads off--or even if they're just plain not interested when they see the buck.  Perhaps, after all, they just want a little privacy.  What a learning experience this has been!

Posted by Joy Metcalf at 6:48 PM No comments:

Here I've been wondering why my Saanen/Nubian doe (aptly named Sanuba) has such silent heats and why I could never catch her in heat, and it turns out she's the only one that actually caught when the Saanen buck came to visit last November.  I was totally unprepared, had not been feeding this doe as if she were pregnant, had never seen her responsive to the buck at all, so it was a shock when I went out to the barn last Sunday (April 17th), looked in the communal stall, and saw two little kids wobbling around, the doe still cleaning them off, a black and white buckling and an all-white, Saanen-looking doeling.. 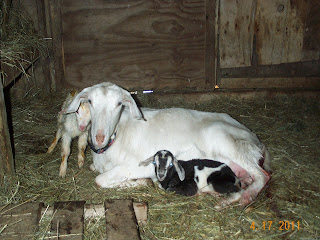 Unfortunately, all was not well.  I suspect one of them was malpresented, because my poor doe was very reluctant to stand.  She'd struggle to her feet, stay up for a minute or two at most, and down she'd go again.  This is not normal.  I wanted to pull the kids, because the doe is CAE positive, but I was frantically trying to track down some colostrum to feed them.  Thank goodness for good friends and neighbors!  KelLee, my neighbor down the road, quickly came over to help me get the doe up, check her over, and see what we could do to give Sanuba some incentive to stand on her own.  She was definitely acting sore.  KelLee had some colostrum at home, so I followed her there to get it, and when I returned, the placenta had passed and the doe had eaten almost all of it.  KelLee and my son Shawn had taught the doeling to nurse while the doe was lying down, but the buckling was very hungry. 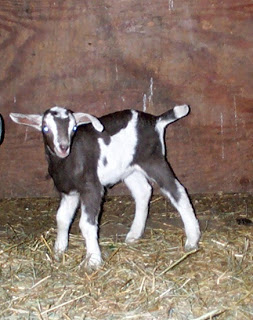 Ironic, isn't it, that the doeling, who I'd most have liked NOT to nurse, was the one who latched on quickly?  Ah, well.  The buckling quickly took to the bottle, and the doeling absolutely refused to have anything to do with it.  Shawn helped me get the doe up and hold her up for 4-5 minutes so the kids could nurse more easily.  After 5 hours, I realized I hadn't seen her drink, so I offered her some water.  You could almost see the lightbulbs go on!  Water!  Omigosh, I'm thirsty.  She struggled up and walked gingerly to the water bucket and drank deeply.  I dragged over a bale of good second-crop hay, and she munched as she lay with her kids. I gave doe and kids a dose of Arnica shortly after the birthing, and later gave Sanuba a dose of Bryonia, as it seemed to match her symptoms well--thirstless, reluctance to move.

Throught the night I fed the buckling and checked the doe.  By morning, it was clear that she was not improving.  I'd already talked to my local vet, so I called her again and confirmed that she was needed. A shot of Banamine and a shot of a long-acting antibiotic, a look at 3 other critters on the farm, and I was poorer by some $200+ but easier in my mind. 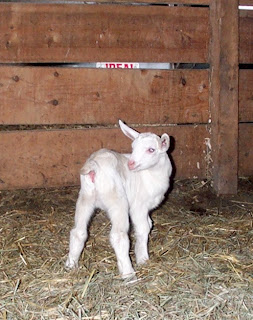 Next day, Sanuba was up and moving around, but had congested udder.  That is, edema of the udder.  The udder was cool to the touch, not red, but hard to the touch, and very little milk.  At that point, I emailed Glen Dupree, a homeopathic vet I think very highly of, having taken a class from him at MOFGA.  He gave me instructions on what remedies to give and when, and advised me to alternate hot and cold compresses twice a day.  Ugh.  I don't know which finds it more disagreeable, the doe or I, but we're both carrying on.

Today her udder is noticeably softer, and instead of getting barely a squirt and working at getting a teaspoonful, I actually got 1/4 cup of milk tonight. :)  Hooray!  Any milk I get is fed back to the doe, disguised as a coating for grain. She's not like Beatrice, who readily slurps down milk or kefir.

As I looked into her stall tonight and watched the kids bouncing all around, rearing up, bucking, and racing in circles, I know why I love husbandry.  I may have come late to the farm, but it's been in my blood for generations.  My grandfather walked these fields and woods with me when I was a child and instilled a love of the land.  This is the way life is supposed to be.
Posted by Joy Metcalf at 9:44 PM No comments: