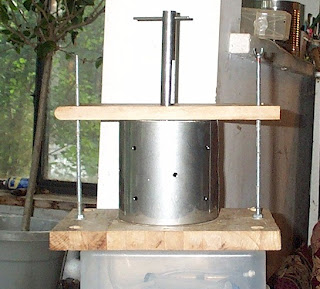 I thought I'd just post the almost last design change of my cheese press.  I say "almost" because you will not that there are no legs on it...yet.  I plan to cut dowels to fit into the existing holes and make legs, and probably I'll make a groove or two from the center of the cheese mold to the edge to carry away the liquid from pressing.

Note the 6-inch stainless steel mold.  I priced these online from $84.50 for a 5-1/2 inch mold.  I had the local machine shop make me one for $25.00.  I think he did a great job, and it works wonderfully.  My 4-inch mold was even less expensive--the tin from Sesame Tahini, exactly 4-inches and a perfect size for a small cheese.
Posted by Joy Metcalf at 7:39 PM No comments:

Genesis of a cheese press

When I decided to jump in the deep water, as it were, of cheesemaking, and try (gulp!) hard cheeses, it became clear very quickly that I had to have a cheese press.  A real cheese press.  Everything I saw online was just too darned expensive, so I designed my own--and then updated it again and again. 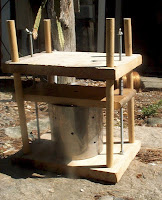 Iteration 1:  Actually it was iteration 2, since 1 was a dismal failure.  I had a bottom board, a top board, and four dowels holding it together, and I used whatever I could come up with for followers.  With only one board, there was no way to keep the weights--salvaged from someone's abandoned bench press set--evenly distributed.  The cheese was always lopsided.  So, I added two springs and an extra board, one resting close to the cheese mold.  It was easier to keep the cheese straight, but still pretty primitive.

I used this for several months, but piling all those weights on top was, umm, interesting.  Some of the weights were cement filled, and slightly rounded.  They didn't sit evenly.

I had a local machinest make me a 6 inch cheese mold with stainless steel.  This cost approximately 1/2 what I would have paid online, and no shipping, either.  However, I mainly used a 4 inch mold since I was still experimenting, just trying to see if I could produce anything worthwhile.  When I broke open the cheeses this spring, I was pleasantly surprised and eager to move on to the next level.  Clearly, it was time to upgrade my press.
While visiting a local Amish family, I saw the pressure gauge and press that Hoegger's sells.  I'd looked at both online several times, and had vascillated about the pressure gauge.  No more!  I ordered it within a few days.

Iteration 3:  The modifications were minimal.  One of the upper boards and the springs came off, and a small hole drilled through the center of the board to accommodate the gauge stem, a recessed place for the bolt, and I was set to try it.  I also sprung for real, honest-to-goodness wooden followers. 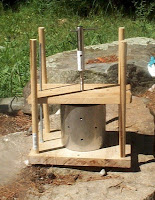 Getting that pressure gauge was one of the best things I've done for myself.  Since it was made for Hoegger's press, the pressure probably isn't exactly the same.  However, it works, and my cheeses are oh, so much more uniform, and  And sooo much easier to press.  I've taken to using the 6 inch mold almost exclusively. Next modification is removing the 4 dowels and shortening the side screws.  I think tomorrow might be the very day to do that.  I have goat milk and cow milk ripening for cheese tomorrow.