I love Juustoa cheese, or Leipäjuusto, a Finnish cheese, called "coffee cheese", because they put chunks of it in their coffee.  It can also be served as a side dish or a dessert.  I like it for breakfast.  Or even for lunch or dinner.  It's versatile.

I  had extra milk to play with, and wanted something different for lunch, so I decided to make some and record the process.  Maybe it was the recording that did the trick, but this was absolutely the best Juustoa I've made yet.

Heat 1 gallon of raw goat milk to about 86°, then mix together and add:
1 heaping Tbsp cornstarch
1/2 tsp (more or less) salt
1 Tbsp sugar

Now add about 6 drops of double strength rennet mixed with 1/8 C of water and stir well.  Let rest for about an hour.  In this time, it will set almost like a custard.  Check for a "clean break", 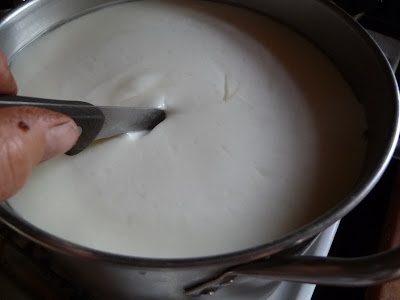 and break up to approximately 1-inch curds. For this cheese, you can just stir it, as I did, using the edge of the spoon to cut larger curds when necessary. 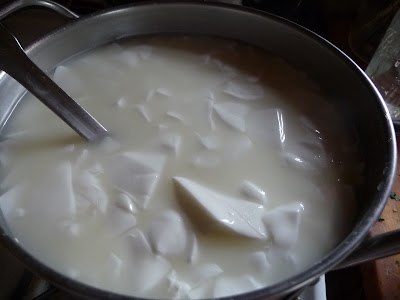 At this point I drain it just like any other cheese, with cheesecloth and a colander,letting it rest until the curds settle and the whey drains out a bit. 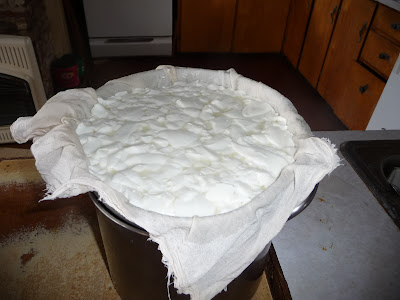 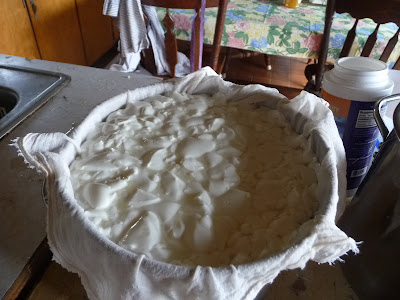 To speed this up a bit, hang the curds by bringing all 4 corners of the cheesecloth together to form a bag and suspending it over a pan to catch the whey.  I occasionally work the curds by kneading the bag a bit to release more whey. 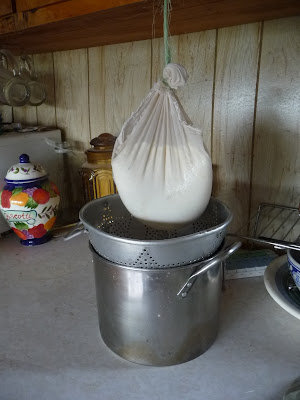 When it's well drained, it's time to put the curds into a round cake pan.  Press it all around evenly, and bake in a 400°F oven for 15-20 minutes, draining the whey off every few minutes.  Now remove from the oven and put it under the broiler unti just browned.  Again, pour off the whey as it seeps out.  At this point, you can either serve it or flip it in the pan and brown the other side, which is what I opted to do. 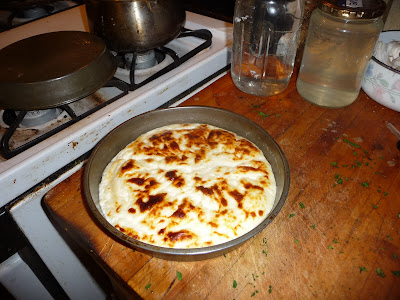 Traditionally this is served with lingonberry jam, but I served it for lunch with blackberry jam. 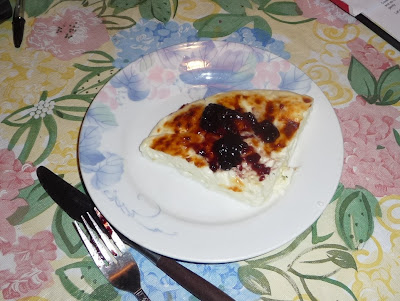 Don't expect this to last very long. It's light and elegant, and oh so delicious!

We had just rescued the tractor from a mud hole in the pasture, and I parked it up by the barn for use later.  Isn't it wonderful how a tractor can be such a entertaining toy?  The  horses, of course, didn't think it was worth mention, but the goats thoroughly checked it out before determining that eats were elsewhere.

Posted by Joy Metcalf at 8:58 PM No comments: