I went through all my cheese cultures a few days ago.  I finally listed them all in a computer file so when I order again, I won't end up with duplicates.  After 5 years of cheesemaking, you'd think I'd have done that before.  Nah!

I had so much milk that I had to make cheese again, despite starting to dry off Beatrice.  So, since I made Gorgonzola a few days ago, I thought I'd try Cambozola, a German blue cheese, which is sort of a combination of Camembert and Gorgonzola.

So, the first thing I didn't do was thoroughly read through the recipe, which I found on cheeseforum.org.  Ah, well, I guess I'll know in 3 months whether that was a problem.

Anyway, I started out with 2 gallons of raw goatmilk, heated it to 82° (because it's goat milk) and added 1/4 tsp of Flora Danica. Then I added rehydrated Penicillium candidum and Penicillium roqueforti.  That's the part I'm wondering about.  The recipe said to add the P. candidum and then sprinkle the P. roqueforti over the curds later.  Since I had just made Gorgonzola and the P. roqueforti gets added to the milk, well...you get the picture.

Then I added the rennet--and it didn't set properly, took much longer than it should have.  I finally cut the curds and, following the recipe by this time, drained it in a colander lined with cheesecloth. After a half hour, I ladled it into two Camembert molds, flipped them a few times over the next several hours, and voilà!  two Cambozolas!  They're still in their molds, and will be until tomorrow morning, but I'm looking forward to seeing if they turn out better this time than the last time I tried, last year.

That cheese tasted pretty good, but it was a much drier cheese than it was supposed to be.  I'm not even sure it could be called a Cambozola, because I think I pressed it. I've improved over the past year.  Most of my cheeses actually look and taste like they're supposed to. That's progress!

Posted by Joy Metcalf at 9:40 PM No comments:

I've been seriously considering getting a milking machine.  Another goat addict has a surge milker she'll let me use, but I have to find a vacuum pump.  Finding one is not a problem; finding one I can afford is a bit harder.

It's getting on in the year and as usual, my hands are feeling the strain of hand milking.  I'd put away my Henry Milker, since I didn't like the effects it was having on Beatrice's udder.  Today I found it, and wondered whether I could reverse Bea's milk production and start using it again.  She's on once a day milking now, and is giving only 4-5 pounds a day, a little over half a gallon.  As I looked at the teat cup, though, my misgivings returned.  If I can just find a way to make a soft gasket for the top of the teat cup, I might try it again.  Until I do that, I don't want to risk it.  The Henry Milker pulls her teats into the teat cup, but more than that, it pulls part of the mammary tissue as well, so one side of her udder is damaged.  So far, I haven't found that way. I even emailed Mike Henry to see if he had any ideas, but I never heard from him.

I think it's time to get just bite the bullet (sigh...) and buy the vacuum pump.

I had a devil of a time trying to keep the humidity high enough and the temperature low enough for these cheeses that I made a month ago.  I finally just put them in plastic Ziplock bags and left them in the refrigerator, turning them every day, and wondered when they'd be ready. 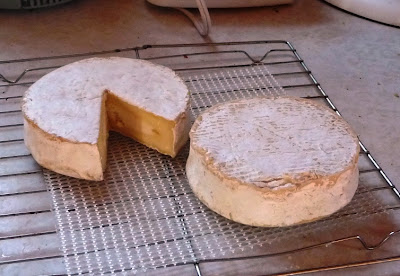 I've read conflicting advice about how long to age Camembert, going from 3 weeks to 7 or 8 weeks.  Today I opened up the bags and took a look.  One smelled a bit like ammonia. Not overpowering, but faintly.  The other smelled divine.  I decided to let them come to room temperature to see if the ammonia smell dispelled.  After an hour, my curiosity got the best of me and I sliced into the ammoniated one.  It didn't taste half bad!  In fact, it tasted pretty good, and it looked to be ripening well.  I don't like Camembert when it gets runny and strong, so this was just right:  the outside was soft and pliable, the middle firm.

I wondered about the second one.  As I put it down, I noticed that it, too, was getting soft on the outside.  A small piece was hanging off, so I picked it off and tasted it.  This one is even better. Yum!

Tomorrow I'm having lunch with some friends.  We're all supposed to bring something to go with the salad.  I think I'll bring feta--and Camembert.
Posted by Joy Metcalf at 11:22 PM No comments: 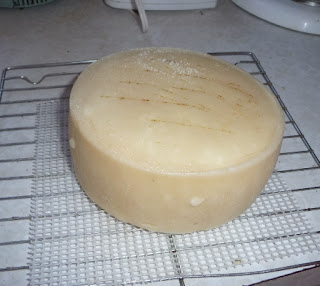