I was at a friend's house a few weeks ago, and she offered me a few organ meats, called offal in other locales, to take home:  liver, heart, and tongue, to be specific.  I gladly accepted.  My grandparents were farmers, and they wasted nothing.  Scrapple and head cheese were common fare, and I loved second helpings on kidneys and liver.

Yesterday found me in a bit of a quandry.  What should I cook for supper?  I betook myself to the freezer to ponder the situation.  Aha!  Tongue!  Just the thing!  I dumped it unceremoniously into a pot and covered it with water.  When it had cooked enough to thaw, I emptied the water, stuck a few cloves in various locations, cut up and onion and a carrot, and added a couple of fresh bay leaves and some dried thyme.


The afternoon turned out to be a bit hectic, so I picked up a pizza for a quick meal and let the tongue simmer all evening.

Today I reheated the tongue, pulled off the skin, then sliced it and served it with potatoes and a horseradish mustard. As I savored every bite, I thought of my friend gratefully

I admit that it's far easier to dam-raise kids rather than bottle feed.  However, there are sound reasons to bottle raise.  I own three of them:  CAE-positive does.  These does are healthy and strong, though Leah does freshen with congested udder, which resolves pretty quickly using homeopathic remedies, but I really don't want their kids contracting the disease (Caprine Athritis Encephalitis) when it can so easily be avoided.

I started out using 16 oz pop bottles with Pritchard nipples. As I was mulling over how to keep the milk warm while feeding one kid at a time, I perceived that a gloved potholder would hold the warmth admirably.  They gave an added bonus of fitting into a gallon pot in such a way that nothing fell over, as the bottles were wont to do without that extra help.  And the kids thought it was great fun to sniff around in there!


After 3 days, I surmised that I really had to do this differently.  Besides the three that were on either end of the feeding line nibbling and climbing on me, I was soon going to run out of time.  I'd thought about a lambar before, but now I got serious.

I took a 5 gallon food-grade bucket and drilled 1/2 inch holes in it, 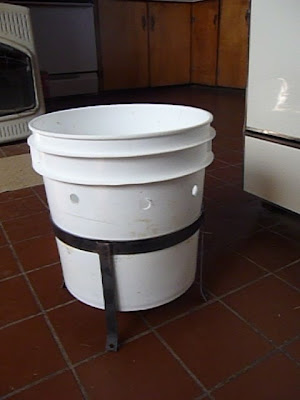 bought lambar nipples and food-grade clear plastic tubing, flutter valves so the milk, once sucked into the tubes, wouldn't fall back into the bucket, a metal bucket ring to hold the bucket, and began rigging the lambar.

then warm the tubing over the flame to encourage the stretch, let it cool slowly, and then, before it's completely cool, remove the screwdriver and quickly insert the flutter valve.

Getting the length of the tubes was a bit tricky, too.  Because I wanted to monitor how much each kid was getting, I poured the milk rations into separate quart bottles. 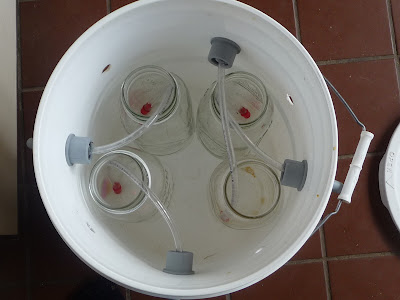 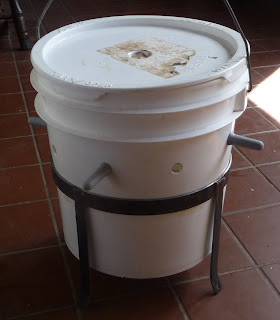 Once the bottles were filled, I could put a lid on the bucket, carry it to the barn, and feed all four kids at once.
At least, that was the theory.  In practice, it took another 3 or 4 days. First I had to switch the Pritchard nipples to the grey nipples and get them used to that, then they had to be standing and nursing, rather than sitting in my lap.  Once they reached that point, I could transfer them to the lambar.  A couple caught on immediately, the other two took some coaxing.  Dally, true to her name (actually, that's how she came by her name), dilly-dallied and was the last to embrace the lambar.  Did I mention that the bucket holder is welded to an old tire?  That raises the bucket to the perfect height for kids.  Works great!

I don't use the quart jars to track their feediings anymore.  Now I fill the jars with water to displace and raise the level of the milk, making it easier for the kids to suck, and I pour the milk directly into the plastic bucket, enough to last a couple of meals.  I check it mid-afternoon and add milk then; if it isn't empty, it's pretty darned close.  They've actually backed off eating as much.  They know it's there, and I've slowly dropped the temperature of the milk so they eat more naturally. Instead of guzzling 16 ounces all at once, they're more likely to have snacks throughout the day, just as they would were they nursing their dams. 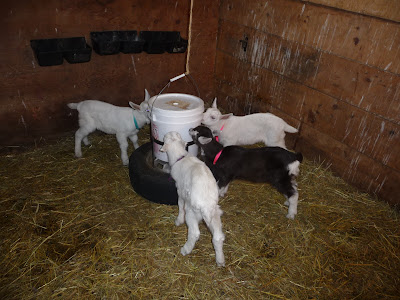 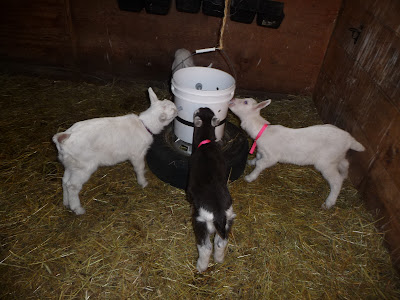 I watched Violet and her bucklings today.  They nurse for a minute or two, and then she walks off.  "That's enough, boys.  You can have more later."

I love the lambar.  I still check to make sure they're eating on demand, and when I find it empty, I know they are.  Sometimes I encourage them to nurse while I'm there, but usually they're already full.  Today I rigged the stall door so they can go in and out and play outside.  Life is good.