I admit it, small things bother me, such as repetitive, unnecessary words, incorrectly pronounced words, and awful spelling.  I want to just grab the person and shake him!  or her. Actually, when I grew up, the correct way to say this was "and shake him", as it was understood that he/him was understood to include both male and female.  However, back in the--was it the 70's?  80's?  somewhere around there--a bunch of vocal feminists displayed their ignorance by demanding that it was BAD FORM and INSULTING TO WOMEN to use the masculine pronoun.  For a long time we struggled with he/she, him/her, and finally settled on the plural form, "they, their", etcetera.

Obviously, these vocal reformers didn't speak foreign languages, because they'd have realized that several languages throw around masculine, feminine, and neuter terms and no one gets upset about it.

For example, in German, the word for girl is "das Mädchen".  Das is neuter, and no one thinks they are insulting young girls.  In French, the word for table is "la table".  Do they think all tables are female?  Hardly.  It's just grammatically a feminine noun.

How about "enthused"?  Do you know there's no such word?  The word is "enthusiastic", but enthused seems to have found a niche in Americana.  I guess I'll have to live with that one.  Sigh.

Ah, yes, now we get to the latest spelling gaff that drives me right up a wall.  I refer to "alot".  Folks, there is no such word as "alot".  It's two words.  a lot, and could you have enough love for the language to at least know what you're saying?  "A lot" is "a quantity" or "a large amount".  I love the way one The Urban Dictionary definition put it:  1. Illiterate spelling of a lot.  2. Broken keyboard way of spelling a lot.  There are several more that are hilarious; do take time to check them out.

Another pet peeve:  nuclear, pronounced NEW CLEE AR  not NEW QUE LER.  I had a college professor who was, of all things, a nuclear physicist, and yet even he couldn't pronounce it correctly.  I could only sit there and shake my head, wondering how such a brilliant man (for he was) couldn't pronounce the field in which he had earned a Ph.D.

There are more:  mischievous (three syllables, please, not four, and accent on the first syllable); zoology is "ZO ology" not "ZOO ology" as I learned early on from a college roommate who was majoring is Zoology, and drummed it into our heads; realtor has one a, and it's before the t. (reel tor or real tor, not reel a tor, please); and finally (for now) exquisite, which has the emphasis on the FIRST syllable, not the second.

Speaking of poor pronunciations, I think Maeve Maddox says it as well as any in her column http://www.dailywritingtips.com/50-incorrect-pronunciations-that-you-should-avoid.

Rant over.  I feel better already.

The trouble with auroras

Several years ago, I spent three weeks in Anchorage, from mid February to early March.  The night before I flew in, there was a spectacular display.  The night after I flew out, there was another.  While I was there, not one single auroral event.  I've always consoled myself by tellng myself it was just Alaska's way of telling me I had to come back.  I'll make it one day, mid-winter, in time to see both the aurora and the Iditorod--which, btw, took place the day after I left.  Sigh.  It was a business trip and I really had little control over the timing.

Now I live in midcoast Maine, and for the life of me, it's always either cloudy or full moon when the aurora comes this far south.  I received an aurora alert yesterday telling of a CME (coronal mass ejection) that would guarantee aurora sightings even farther south than Maine.  No fair! It's happened again, and this time it's both cloudy and a full moon! 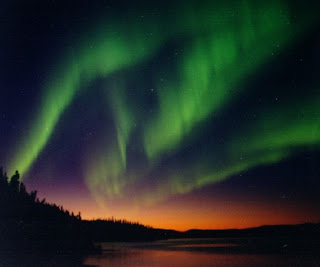 However, I'm ever hopeful, and full moon or not, cloudy or not, I will arise early and hope I can see something in the sky.  It's been a long drought.  I love seeing the aurora, and the weather and moon are bound to cooperate eventually.  The eleven year solar cycle should be at its peak, though it seems to be rather late this time around.  At any rate, the future looks promising for seeing the aurora this year.

Oh...and just as an aside to the "climate changes are caused by mankind" crowd, do take time to look at this link.  There's correlation between auroral activity and climate changes, since at least 1640.  This scientific paper, of course, is only one of many which obviates the spurious "consensus" argument promulgated by Al Gore, corporatist extraordinaire, but of special interest to me since it concerns the aurora.
Posted by Joy Metcalf at 12:05 AM 2 comments:

I hate being angry with Zoë.  She's cute, and fun, and warms my heart.  Today, though, we went out in the car and I made two stops.  The first was Wentworth's, the local grocery store.  I picked up a few vegetables for dinner, and at the last minute grabbed a package of four chocolate chip cookies, and ate one when I returned to the car.  A few minutes later, I stopped at a neighbor's house and was there about 10 minutes.  In the meantime, Zoë was scarfing down the other three cookies--and then returned to the back seat by the time I got back.

I realized as soon as I got in that something was out of whack.  Cookies!  Right!  Where are they?  No sign of them...and then I saw the empty container. Oh, no! This was not good.  Chocolate can be poisonous to dogs, and I didn't know what the limit would be for an 18 lb dog.  I was so angry, I smacked Zoë on the rump and told her in no uncertain terms that she was a BAD DOG!

As soon as I got home, I put her in "her spot" (her bed) and called the vet.  .  Thankfully, the quantity she ate wasn't enough to seriously harm her, just give her a bad case of diarrhea.  Even so, I wanted to make an impression on her.  Every time she tried to leave her bed, I ordered her back there, telling her sternly that she should STAY.  Poor Zoë, she slunk back to her bed on a couple of occasions, on too many more, I dragged her back by the collar.  You STAY, you BAD, BAD dog. Finally, after two hours, I let her come downstairs.  I don't know if it will help, if she'll connect my anger with her eating the cookies.  I hope so.  I don't want to lose my Zoë to chocolate, raisins, grapes, or any of the other things that can prove toxic to dogs.

Fox Terriers are normally pretty active little dogs, but her energy level tonight was higher than normal.  Shawn took her outside and threw the squeaky ball for her until she was exhausted. As I write, she's crashed out on the floor.  I'll have to keep an ear open during the night to let her out if she needs me to, but that's a minor inconvenience.  I'm just very thankful tonight that Zoë is okay.  I've made myself and her a promise:  No temptation left in the car when she's along.
Posted by Joy Metcalf at 10:06 PM No comments: