Of desperation and its outcome 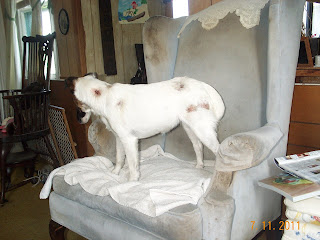 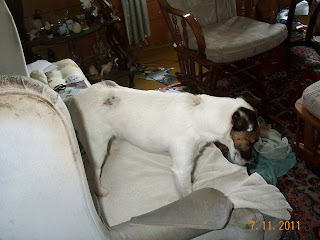 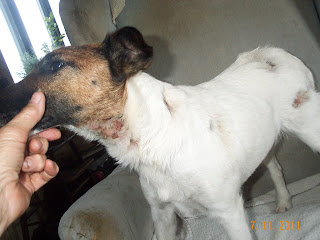 A couple of weeks ago, Zoe was scratching so much, and had so many fleas, that in desperation, I used Frontline Plus on her. Now, I used it once or twice last year, but it's not something I'm fond of. I hate using any kind of chemicals, but the herbal spray I was using didn't seem to be doing much. About a week later, Zoe broke out, in one afternoon, with hot spots all over her body. The sores were angry red and weepy, and ranged from the size of a dime to larger than a half-dollar. No itching, just real evidence of toxins in her body.

I wasn't sure what it was from at first, and started ticking off all the things that she might have gotten into.  We live on a farm, after all, so maybe she had found something in the shed and rolled in it?  Nope, the door was closed.  Allergic reaction to sweat bees or ground bees?  Maybe.  Reaction to deer flies?  Possibly.  Then I remembered the Frontline Plus and after some searching online, found a discussion group on Amazon.  Though Zoe's particular reaction wasn't described, I did read about  hot spots at the application site.  Well, one of the spots is definitely there.

I took Zoe to the local vet, who diagnosed Acute Moist Dermatitis, aka hot spots, and prescribed Benadril and steroidal cream.  In other words, to fix the problem, let's shut down the immune system.  I paid the bill, thanked the vet, and went home to email Dr. Glen Dupree.  I love this vet; he never fails to come through.  Apis, he said, and apply Calendula tincture (10 drops per ounce of water, sprayed on) or green tea or Aloe juice.  By the next morning her hot spots were pink and healing instead of raw and red.  Another homeopathic remedy followed.  In the meantime, I mixed up some Calendula ointment, Aloe gel, and Vitamin E and applied that to the hot spots that weren't too sore to touch. For five days, Zoe just lay on "her" chair and rarely moved.  She went outside when she needed to, but had no appetite--my little dog who could eat her meal, mine, and yours and look for more!.

It was amazing to see how quickly the lesions healed.  I've had other dogs that got an occasional hot spot, but none ever cleared up that quickly.  I knew she had turned the corner on day 5 when someone came to the door and she lept off the chair to greet them.

She's looking lots better now.  Her hair is growing back, but so far as Frontline Plus is concerned, I'll never use any spot- on chemical (poison) again.  Instead, I'm using a growth inhibitor for fleas on the carpets and stuffed furniture, boric acid crystals as well, and adding Flea Free herbal/garlic food supplement to her food every day.  I may also add Brewers yeast, and apple cider vinegar to her water.  Perhaps she won't be so tasty, then.

Oh, and did I mention?  She still has fleas.
Posted by Joy Metcalf at 1:28 PM No comments:

No kidding around this time

One of the most disagreeable tasks presented to any goat herder is castration of bucklings before they become sexually mature.  Meatball, Emily's buckling, has reached 7 weeks, and the deed had to be done.  There are three methods of castration, but the easiest for the human, and possibly the hardest for the buckling, is by using the Elastrator.  Poor Meatball!  It isn't enough to remind myself that wethering him (castrating him) will give him a chance to live, rather than just got straight to the auction for meat.  Watching his discomfort, his pain, is hard and guilt-filled.  It generally takes 2-3 days for a buckling to be back to normal.  Tonight I've given him homeopathic Arnica.  Hopefully it will make him more comfortable, poor little guy.

Today we're celebrating Independence Day, and the Republic which was formed when 13 Independent Colonies became 13 Independent States, with a federal government as their agent.  Most Americans have either forgotten or have never known that the first document to bind the States together was the Articles of Confederation.  Sadly, and worse still, most Americans have never read the Constitution for the united States of America nor the Federalist Papers, nor the document that started it all, the Declaration of Independence.

The results of this lack of knowledge are all too obvious today.  The Federal Government has become the Master rather than the agent, and dictates to the States, rather than taking direction from them.  The Congress has forgotten its role and the Executive has arrogated more and more power that rightfully belongs to Congress.  The only lawful, Constitutional money, gold and silver, has been replaced with paper money, Federal Reserve Notes, issued by private bankers, who have, by debasing our currency, robbed us of our true wealth.  A dollar today buys what about 3 cents would buy in 1920, and the dollar has lost approximately 40% of its value since 2000.

We have more regulations that limit our Constitutionally-guaranteed freedoms, issued by non-elected bureaucrats of extra-Constitutional agencies, than our Founding Fathers could have imagined.  Our once great Republic has become a Marxist/Fabian Socialist wasteland, and most Americans aren't even aware of it.  As Benjamin Franklin reputedly warned us, we have sacrificed our freedom for "security" and have lost both.

Even our food supply is restricted.  The food gestapos raid farms and hold women and children at gunpoint for the "crime" of selling raw milk to informed adults.  Our right to travel has been converted to a privilege requiring licensing.  Our common law right to work and keep the fruits of our labors has been converted to taxable "income".  Yet not one person in a hundred is aware of the fraud behind all of these activities.

Yesterday I received a weekly email newsletter from Franklin Sanders, The Moneychanger.  Below are his comments.  I could not have said it so well.  Happy Independence Day, America!

We are only free to do what we have a moral right to do, no more.  Substitute licentiousness & & rebellion & anarchy for that, and you have, well, something that looks like the USA today.

Another thing:  no man  and certainly no constitution, "grants" or "protects" your rights.  You have no rights unless you as a "belligerent claimant in person"  ENFORCE those rights.  That part of the "self" in self-government.  If you won't fight, you aren't free, and your children surely won't be.

Thus the men who signed the Declaration of Independence, after they had made their case against George III & declared the independence of their sovereign states, ended with this warrant:

"With a firm Reliance on the Protection of Divine Providence, we mutually pledge to each  other our Lives, our Fortunes, and our sacred Honor."

If you aren't willing to pledge the same, NOT when the mob is clamouring for war & patriotism is cheap, but when most of the country opposes the law & the truth, and then stake everything on maintaining your rights, you aren't free, and never will be.  When those men signed that Declaration, less than 25% of the country wanted secession and independence, & that number fell sharply when the British troops landed.

Finally, the signers knew there is only one guarantor of liberty.  As the Swiss philosopher Henri-Frederic Amiel said 75 years later, "If liberty is to be saved, it will not be by the doubters, the men of science, or the materialists; it will  be by religious conviction, by the faith of individuals who believe that God wills men to be free but also pure; it will be by the seekers after holiness, by those old- fashioned pious persons who speak of immortality & eternal life, and prefer the soul to the whole world; it will be by the enfranchised children of the ancient faith of the human race."

Posted by Joy Metcalf at 5:08 PM No comments: