I went out to the barn to milk and feed, glanced in at the kids, who were now on their second day of being separated from Violet at night, and all seemed well.  I finished the feeding and milking, then went back to the house and got the kids' bottles ready.  I've decided that for now I'll leave them with her during the day, but I want them to be bottle-savvy, as you never know when they'll need supplements or other things that are much easier to give via the milk.

I went into the stall, sat on the pallet, looked up to call them over...and gasped!  Spotty's head was covered with blood!  I left the bottles, scooped him up, and carried him quickly to the house.  He either scratched himself with his hind hoof and broke through the disbudding scar, or smacked his head against something, or...who knows?  He's a kid!  Anything could have happened!  My mother held him while I cleaned him up first the head, then the face, then the head, then his legs, then the head, then her hand...that wound would not stop bleeding.

I had her hold the damp cloth on his head while I searched for bandages.  An hour passed, still bleeding.  Suddenly I thought, "Maybe I shouldn't have a damp cloth on it.  Maybe it's keeping it from coagulating."  Oh, the obvious truths that smack us between the eyes betimes!

The big band-aid I put on him only kept it in for a short time, long enough to give him a bit more milk. 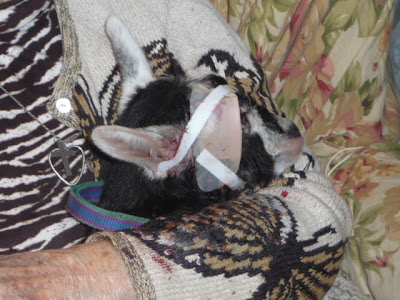 I found some grocery-store cheesecloth, the kind that looks like gauze.  Cutting a large strip with the scissors, I folded it neatly and pressed it to his wound.  "Stop!" cried my mother, "You're hurting him!"  Yeh, I knew that, but it's pretty hard to apply pressure to a bleeding wound without causing pain, so I explained carefully while I kept the pressure on, then had her hold the gauze while I wrapped his head with enough bandage and tape to hold it on.

My mother loves animals, and loves babies of all kinds.  She was in her element, crooning to Spotty and singing him lullabies.  When my son showed up and she wanted to show him the wound, I decided it was time for Spotty to go into the dog crate until the bleeding had stopped completely.  An hour later, the gauze had fallen out, blood had stopped flowing, and I removed the rest of the bandage.  Spotty was so glad to get back to his momma and have a noon snack.  So much better than a bottle!

With that taken care of, I commenced cleaning the Saanens' stall.  I had cleaned the big stall where Violet had kidded the day before, but it was a piece of cake, as well should it be, having been stripped only 2 weeks before.  It's amazing how stalls can look reasonably clean until you start stripping away all the wet, compacted mess underneath the top layer of dry hay annd bedding.  A minimum of 13 or 14 much bucket loads later, I was able to put down fresh shavings and cover it with coarse hay, fill the feeders, clean and refill the water buckets, and know that all was prepared for the coming kids.

They're due on Friday and Saturday.  Okay, girls!  You have permission to kid now!
Posted by Joy Metcalf at 6:55 PM