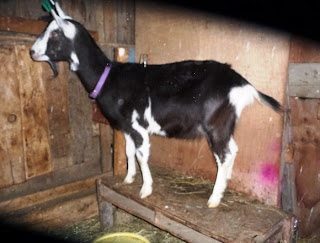 The day had arrived where I would be free to drive to New Hampshire and pick up my new doe, a Sable doe with new bloodlines for my herd.  Flick’s-Acres BH Nobella was the raffle doe at the ADGA convention in 2011, won by a teenaged girl whose family raises Toggenbergs.  They wanted her in a Sable herd, where her kids would not be grades.  Because I had posted some messages about Sables on the ADGA District 1 News forum, they knew I was a Sable breeder, and asked if I wanted her.  Of course!  What a wonderful opportunity, and in the greatness of their hearts, the family gave me the doe, now a long yearling.


The back of my car was bedded down with hay, laid over a tarp that covered the flat area in the back of my Goatmobile—a 1995 Toyota Camry wagon.  I left my house at 6:45  and met my friend Maria at 7:00.  Maria was my navigator and copilot, and my relief driver if needed.  I was sure I’d need a second driver after having gotten to bed way too late, and getting up earlier than usual.  Have you ever noticed that the one sure way to get a short night’s sleep is to need and plan on a long night’s sleep?  It always takes longer than anticipated to make everything ready for the morning.

After a prayer for safekeeping, we filled the tires with air—they were all low!—and made our journey southward.  It was a long drive, but there’s something about having a friend along, conversing and laughing and catching up on old news, that makes the miles fly by.  I blessed Maria’s presence many times during that journey.  It’s so much easier to have a second person looking at maps and directions than trying to drive and navigate at the same time.

We arrived in Westchester around 1:00 and picked up my new doe.  She’s a skittish little thing and an escape artist, they told me.  They were right!  We pulled over a short time after we left their farm to shorten Bella’s lead, as she was very close to climbing into the back seat.  As I opened the hatch to my car, quick as a wink she was out.  If I hadn’t tied her to the hand rest, she’d have been gone.  Whew!  Needless to say, I didn’t make that mistake again.

A few hours later, only 45 minutes from home, my car died.  Aaargh!  But you know, the location was perfect:  10 minutes from my sister’s house, and after towing the car to his garage, my brother-in-law packed us all into his pickup, goat and all, and drove us home.  I was in the back seat with Bella, and every time she tried to stand up, I soothed her and kept her down.  When we got to the farm, Bella jumped out…..and relieved herself.  Ah!  Timing! It’s everything.

Bella got the big stall with the 2 round bales in it.  She was a bit lonely, but settled in very well.  In the morning, she’ll go into the stall where she can have contact with the others.  I hope she has a restful night.
Posted by Joy Metcalf at 10:31 PM