Of trees and trucks and puppy dogs

Yesterday, after returning Bella to the herd, I took my remaining vehicle, my Dodge diesel pickup truck, and ran a few errands, figuring I'd be back in less than an hour.  My truck is, uh...quirky, to say the least.  I have to disconnect the negative battery terminals on the dual batteries when I park it for any length of time and plug in an engine block heater during the cold winter months, or it just won't start.  There's a short somewhere, but we sure haven't been able to find it.  My radio has always had a mind of its own, working well in the summer, and usually being pretty much non-functional during the winter.  I suspect they're related, but have you ever tried to track down an electrical short in a vehicle?  I threw my hands in the air a long time ago.

First stop, pick up a discarded, unsprayed, untreated Christmas tree in Belfast. The goats love fir and pine and they are wonderful vermifuges, allowing me to forego any other wormer while they have a steady supply.  I  turned off the truck, hopped out and loaded the tree, hopped back into the truck, turned the key..and the truck wouldn't start.  Stunned, I popped the hood, opened it, and made sure the negative cables were secure, wiggling them as I did so.  Back in the truck and turn the key.  RrrrRrrrRrrr.  It made a valiant attempt to start but just couldn't make it.  I repeated my actions.  Still nothing.  I called Shawn, hoping he was still in Belfast.  He was, and would be along in a bit.

My truck doesn't have a great heater at the best of times, and definitely not on a bitter cold day.  Did I mention it was only about 10°?  Aaargh! It was too darn cold to sit in that truck!  After a few more minutes, I got out again, played with the cables one more time, and God answered my prayer.  The truck started right up.  After closing the hood and calling my son once again to let him know all was well,

I went to my next stop, wondering if I should just head home instead.  I found myself rushing, as if being quick could prevent problems with the truck.  Uh uh, that wasn't going to help, so I took a deep breath and continued getting the few items I needed, but at a more leisurely pace.  Of course, the truck started up fine, proving to me that it was, after all, just a loose connection and I didn't have to fret myself about it.  So at my next and last stop, I left the truck running while I ran in and out in under four minutes, proving that I don't listen to myself.

The goats were happy to see the trees I threw out to them, and I was happy to be home.

Today, Saturday, dawned bright and snowy, fine stuff that dusts everything to remind us that it's winter, but it was warmer, in the high 20's, and Zoë happily romped out to the barn with me.  I left the goats in their stalls while I filled the under-barn feeders.  Slowly it dawned on my that Zoë was nowhere to be seen.  I called her.  No Zoë.  I hastily opened the stall doors to release the goats, and headed out the big barn doors.  Where could she have gone?  No tracks.

She must have flown over the snow, because her tracks didn't begin for a good 50 feet.  As I suspect, they headed out across the pasture, through the far gate into the far pasture...and disappeared again.
Frantically I called her, and finally, FINALLY, I saw her running toward me from the woods across the way.  I wanted to throttle her but instead kept calling and encouraging her to come, "Good girl! What a good dog! Come on, puppy!  What a good puppy dog!"  I scooped her up into my arms, petted and praised her some more while she wriggled with delight, and started back to the house.

There's nothing like hunting dog genes to make a dog disobedient.  Zoë must have sniffed out 14 different scents on the way back, and every one of them served to distract her attention from me. 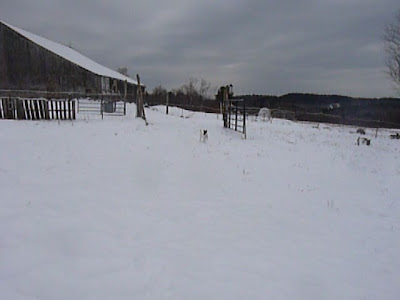 Maybe we don't need that half mile walk to the mailbox today. I think we're good already.