Bringing it all up to date

Wow!  I can't believe it's been so long since I posted.  Since then, we have three new kids, all purebred Saanens.

Beatrice kidded with one doeling on May 8th, which I promptly named Neptune's Fantasy.  She's very correct, and will probably be on her way to Pennsylvania by early August.

Leah had two kids, a doe and a buck, on May 23rd.  I was undecided about going to the HOMDGA Spring Show in Windsor, but Leah made the decision for me.  She was in full labor early morning, and quickly gave birth.


All three kids were immediately separated from their CAE+ dams and are bottle fed on a combination of raw goat milk from negative does and raw cow milk.  Leah's doeling, Fleur de Lys, will stay, and the buckling, Franz, is for sale--but will not be wethered if he doesn't sell quickly.  He's too nice to be a pet or meat, and his bloodlines are valuable.

The two wethers, Euan and Dewey, have been sold, since I don't need to keep them as company for Mime.  In the meantime, I have three Sable bucklings sharing his space.  And what a space it now is!  A neighbor took down some fencing and asked if I could use it.  Could I!  With the help of the Mormon missionaries, the buck pasture has now been doubled, and includes a lot of browse.  They're in goat heaven.   As soon as I open the gate in the morning, they come running out and head for the trees and undergrowth.   It's amazing how quickly goats can clear the understory.  Where before it was hard to see beyond the closest trees, now I can see where they are during the day. 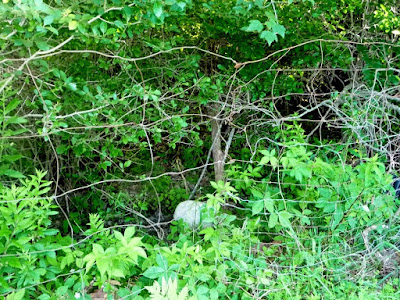 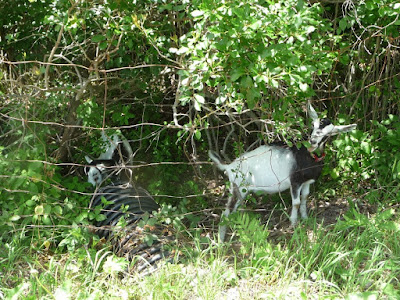 In the afternoon, they usually move out to the more open area, but there's still browse on the edges.