After a long snowy winter and a particularly cold and snow February, hints of spring are appearing here and there.  We still have 4 feet of snow in the yard, but a couple days of thawing and freezing have formed a crust on the snow so that little puppy dog paws don't fall through.  Alas, people do, so snowshoes are still in order if a dog rescue is necessary.  Little dogs just love to wrap themselves around branches and trees. 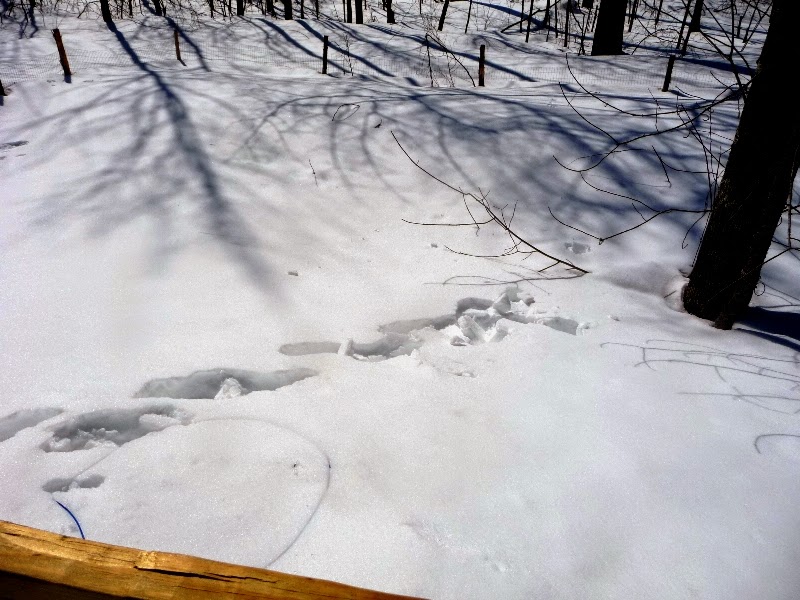 I've had a bird feeder filled with seed for a couple of months, but for a long time no birds appeared.  They all seemed to have gone into hiding.  The first warm day brought the first birds I'd seen all winter to the feeder. (I say "warm" but that's relative.  Eighteen degrees was warm, after a recording breaking February where the average temperature was 6°F.)  The  Black-Capped Chickadees came out of hiding, and I was delighted to see them. Excited, I put up a window feeder and within hours they were brightening my day close up and personal. 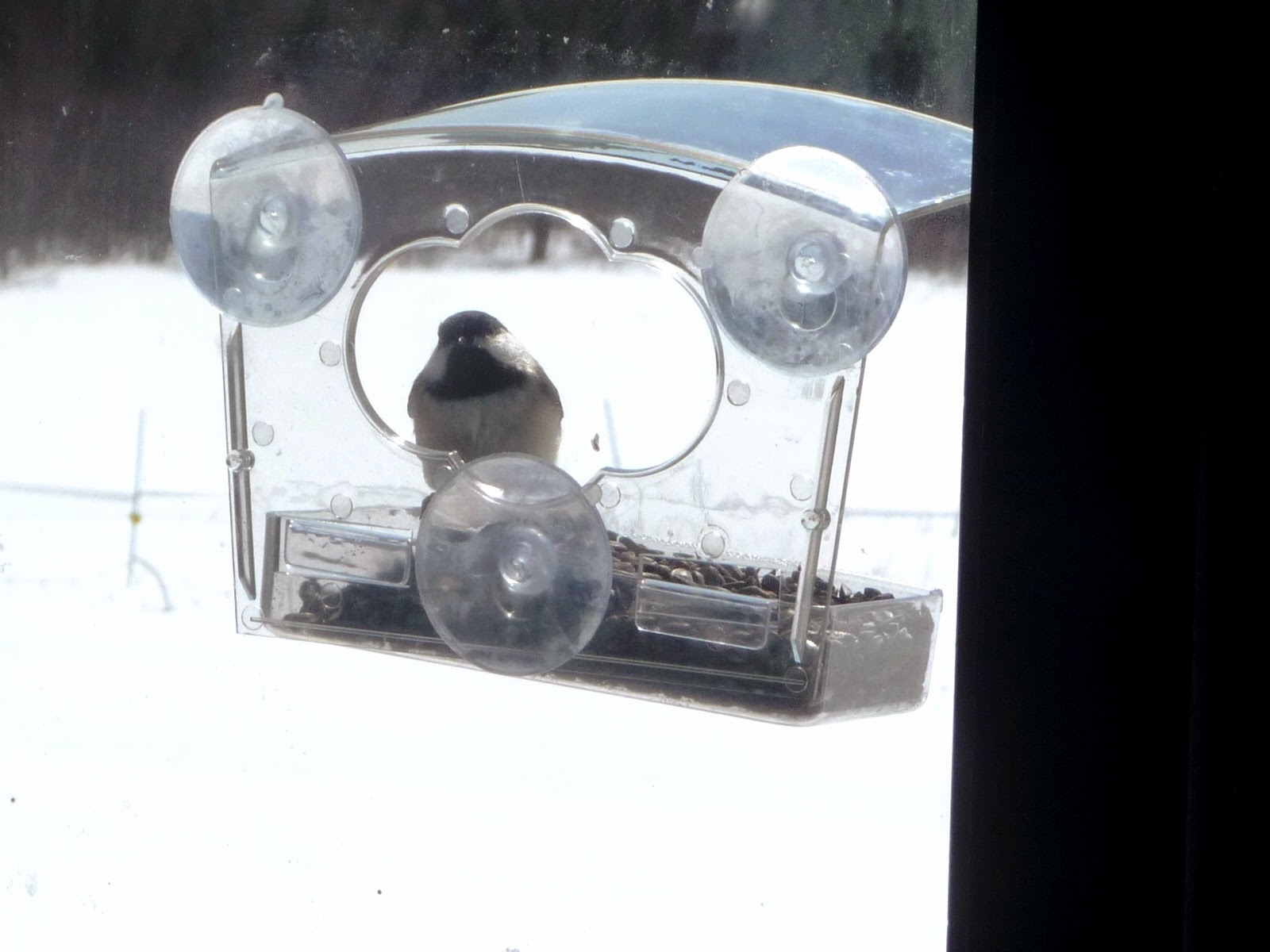 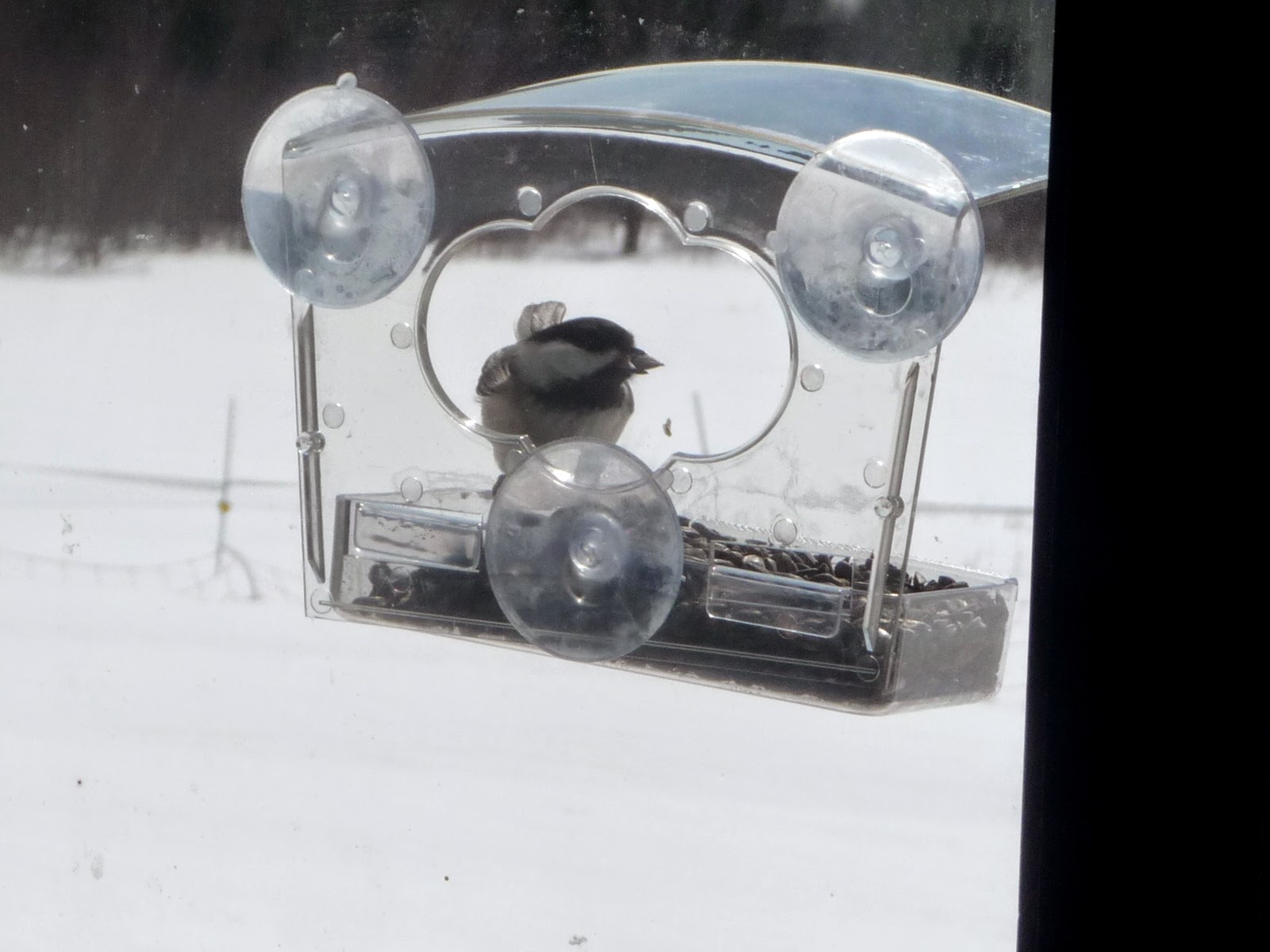 Yesterday I heard the first mating calls, that high, sweet tow-note call that signifies spring.  Not that they aren't chattering, of course, but  for me the sound of "fee-bee" is a true harbinger. A goldfinch also showed up, still in its winter garb. I recognized it only by its bobbing flight. A couple more months and I'll hear "perchcikoree, perchickoree" and see flashes of yellow everywhere.

When I turned on my computer this morning, much to my surprise I had a reminder to turn the clocks ahead tonight.  Tomorrow is the beginning of Daylight Savings Time!  Could it be?  Is the winter that far advanced?  I have two minds about Daylight Savings Time.  On the one hand, I'm glad for the extra time at the end of the day.  On the other hand, I think Maine, especially the eastern part, should be in the Atlantic Time Zone.  Come summer, the first light appears a little after 4:00 in the morning.  If it weren't for DST, it would be 3:00. What are we doing in the Eastern Time Zone this far east?  Government hasn't asked my opinion, of course, but there you have it.

This is an old house, and we have what my grandmother always called "seed flies", little flies that hibernate in the wood and appear when it warms.  I try not to think too closely about that.  They're a nuisance, and as the year wears on they'll be every more of a nuisance, but their first appearance does signify warmer days.

Four of my does are due in about two weeks.    It looks like I'll have to treat them with sulphur over the next two weeks, because they're scratching.  Lice are common in late winter.  I've not had the problem before but it looks like I have it now.  Flowers of sulphur, both internally and externally, should bring that to a halt.

And they're forming udders.  Not a lot, but enough to notice.  When the does get their grain and Chaffhaye ration in the evening, I take time to get them used to being handled.  That diminished the chances of dances on the milkstand, and also allows me to note changes.  As I watch them walking around, I do a little guessing game with myself:  Will D'Arcy have twins? Will her kids be polled? Fingers crossed.

Dandy is narrower than the rest, will she have only one?


Cassie fooled me last year and had only one.  Is she really fat enough to be carrying two?

What about Dolly?  Does she look that wide because she's carrying twins or is it just that she's smaller than the others?

This year will be the first time I'm putting my herd on milk test.  That means all the kids will have to learn to take a bottle so they don't go hungry on test day.  More work for me, but better for them if they should leave earlier than weaning, too.  It also means it's time to set up the milking machine, check the pulsator, ensure that everything is working properly so that there are no surprises when I begin milking again.

Life on a farm is very satisfying. This is the way life is supposed to be.