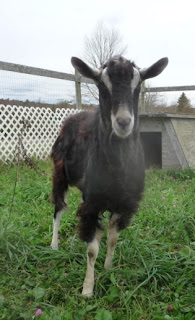 I picked up my buck from Thorndike, where he had been housed since I got him last October.  Ike (Patina M & M Eye Candy) was out on pasture when we got there, and it took a few minutes to get him.  Charlie, my friend and goat mentor, transported him in the back of his capped truck, and Ike was very good all the way home.  In hand, he was strong and had managed to pull Charlie right over before he got out ot the truck.  At my barn, though, Charlie was ready for him and safely and quickly got him into his new stall.

Ike was not happy.  In Thorndike, he'd shared space with four wethers; here he was by himself.  My does came in to say hello, as I opened Angel's stall so they could all touch noses. It's a wonderful thing to have a buck around before a doe is in heat!  All four does came into heat, well-synchronized within 6 days, Leah and Beatrice first, and Violet and Cassie the next day.  So much tail wagging and bleating and how-do-you-do's I haven't seen before, and oh! how they all liked Ike!

It's so early that I didn't want to breed the does yet.  As I considered, though, Violet had not settled last year.  She was open but had a pseuopregnancy.  I didn't want to breed her too late to rebreed her if necessary, so when she showed signs of heat, in she went with Ike.  He thought she was the nicest sight since he'd arrived, and covered her twice in 30 minutes. I left her there overnight.

Next morning, out she came and Ike was devasted.  "Oh, no!  Alone again!  How could you do this to me!" 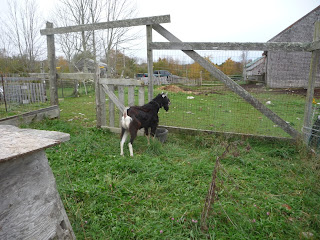 Two days after he arrived, Shawn led him in and out for me, and the following day I was on my own. Ike and I have come to an arrangement:  he doesn't run away from me, and I lead him out to the buck pen, where the does can hang out with them if they wish.  The rest of the time he pretty much spends standing on the roof of his shelter, watching for them; or hanging out by the gate where his fellow captive, Angel, says hello from the paddock. 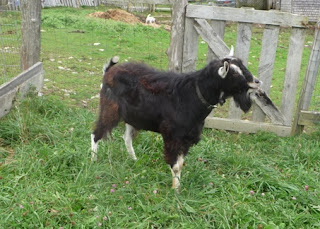 He's a good boy, very well mannered.  He never tries to butt me, doesn't try to pull me now that he knows I'm the Bringer Of Good Things, and is altogether a well-behaved buck, if a bit smelly.  Truth to tell, I don't mind the buck smell like I thought I would, and I even find myself considering keeping a buck here permanently, maybe with company.  Maybe two bucks so I always have alternate bloodlines for my does.