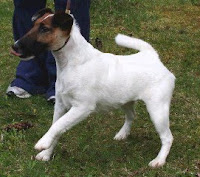 Zoë,a 3 year old Smooth Fox Terrier, has become the delight of my life!  I had been missing Joe, my last dog, and Juneau and Samantha, the dogs who came before him, and thinking of Jody, my first dog, and realizing how much I missed having a dog.  Now it's important to understand that I'm a big dog person.  Jody was 55 lbs; Juneau was 75 lbs and Sammi was 55 lbs, and Joe was over 100 lbs.  In today's economy, though, I was reluctant to get a dog, because I don't feed grocery store dog food; I buy the highest quality I can afford, and add raw meat to it, at a minimum.  As my mind wandered back over the dogs in my life, I thought of Shakespeare, a Fox Terrier we had when I was a child.  I remembered how much fun he was, how upset I was when he left our house and went with my grandfather to the farm in Maine, and how I cried when I found that he was gone for good.

I put an ad on Uncle Henry's and Maine Craigslist for a Smooth Fox Terrier.  I never got a reply from Uncle Henry's, but within a week or two I got replies from Wisconsin and California.  What? I thought I had posted only to Maine!  Then I heard from Fox Terrier Rescue and learned of a spayed bitch in New Hampshire.  They sent me a photo, and I thought, "Ho-hum, not really what I'm looking for, but maybe I'll take a look."  A couple of weeks later, I went to Massachusetts for the day, and stopped on the way back to look at the dog.  Instant love!  She was sooo much cuter in person than her picture conveyed!  I asked her to sit.  Nothing.  I took a treat, put it over her head and slowly moved it back, saying "sit".  She sat.  "Okay," I thought, "she's trainable."  Her name was Lulu.  I took her home.

It was a three hour drive, and the whole time she sat in the back seat facing the back, until finally, the last half-hour, she lay down. Not once did she whimper, not once did she bark. Neither did she respond to her name.

Over the next two or three days, it was apparent that she didn't respond to Lulu.  But that had always been her name!  She was a rescue, yes, but was rescued by her breeder, so I knew her history and her name.  I sat down and looked her in the eyes.  "Lulu," I said, "if that's not your name, then you have to let me know what it is."  Then I waited.  Nothing.  I tried thinking of different names. Nothing felt right, but Lulu felt all wrong. She wasn't a Lulu.  A while later, I said to her, "You have to tell me your name, or if you don't know it, then you have to tell me what you want it to be."  Still nothing.   About 1/2 hour later, I went to call her, "Come her, Lulu!"  What came out, though, was "Come here, Zoë!"  Zoë?  Where did that come from?  But as soon as she heard the name, she turned her head, jumped up, and came bounding to me, wiggling all over.

Zoë it is, then, and she never fails to respond to her name.
Posted by Joy Metcalf at 8:42 PM