Birds and more (or less) birds 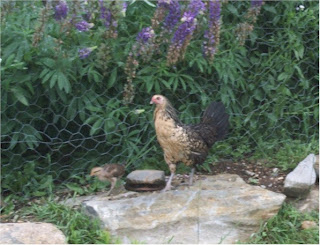 My two broody hens finally finished their setting tasks, but not the way I had anticipated.  I had put several eggs, almost a dozen, under the bantam, and when the Buff Orpington decided to set, I gave her 9 Welsummer eggs and 6 others from my fertile flock.  Twenty-one days later, the bantam hatched out two chicks, only two, and there were only 2 others in the nest.  What happened to the others is a mystery.  Strangely enough, the two she hatched out were her own.  She's a fierce little mother, and I hope she'll raise a few more for me. 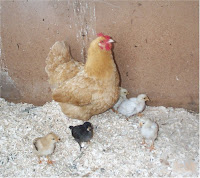 The Buff, who got eggs only a day or two after the bantam started laying, kept setting.  After a few days, a distinct odor began to emanate from her nest area.  Whew!  After a week had passed, I realized she was not going to hatch anything, and things were not the way they were supposed to be.  I bought 8 chicks locally and stuck them under her.  She was thrilled!  But still, she would not move off the nest.  Next day, I reached under her and removed all the eggs and--not surprisingly--dead barely hatched and unhatched chicks.  Only three.  What happened to the other eggs is yet another mystery.  Some pertinent questioning on the Backyard Chicken Forum revealed that first time setters often kill the chicks as they hatch.  They don't quite know what's happening.  Yet, she took to her new chicks like a duck to water, and is an even fiercer mother than the bantam.  In fact, she's driven the bantam and her remaining chick out of the broody house!

We've lost three chicks since then.  One of the Buff's and one of the bantam's drowned, a day apart, in water buckets.  Who'd have guessed that tiny chicks could jump that high?  And early this week another chick disappeared.  All the Buff's chicks were hidden away in a patch of day lilies, and the hen was under the barn.  When she finally showed up again, one chick was missing.  My guess was that the hawk that's been hanging around managed to grab one.

I finally let the two guinea fowl out of the barn today.  I wonder if they'll ever go back in.  The hen looked to be making a nest on the floor, carefully covering her eggs with hay, so I'm hopeful she'll continue and not decide on a new nest spot outdoors.  Certainly the chickens aren't happy to see them wandering around.  The cock chases the rooster unrelentingly, and when the rooster isn't around, he harasses the hens.  So much for "oh, yes, guinea fowl and chickens can be housed in the same place, no problem".  Ha!  And what a racket that cock makes!  When his lady love is in the barn without him, he hollers and screeches and flies bizarrely, ending up at the peak of the roof.  I finally showed his princess the way out the door.  Guinea fowl are definitely not noted for their great intelligence.  All will be forgiven, though, if they but take care of the ticks and black flies..