Beatrice kidded last night, one little doeling. Actually, one good sized doeling.  I weighed her this afternoon and she weighed nine pounds. 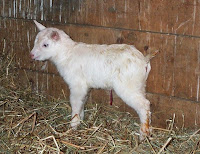 Around 11:30 yesterday, Beatrice wanted to go into her stall.  I let her in, took her out a while later and put her in the kidding stall, but she didn’t want to be there, so I put down fresh bedding in her regular stall and put her back in there.  Then I let the horses and yearlings out, and opened the stall gate for her.  She just looked at me and didn’t move. I closed the gate.  A while later she started moving around.  By 3:00 it was obvious she was going to kid soon.  Her udder was looking much fuller, she had deep cavities in front of her pelvic bones, and her ligaments had softened.   Around 4:30 I was sure she was going to kid in  an hour or less. 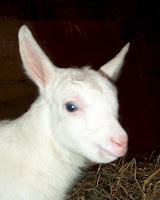 At 6:30 I wondered what was happening, if anything.  She was definitely in labor, but it was slow going. Around that time, she presented a bubble, but it looked like a red bag delivery—red bag instead of grey.  Oh, no!  I went into the house and when I came back, the water had broken--whew!  Maybe it looked red, but not a red-bag delivery (placenta previa).  A while later, I went in the house againwhen I came out, Shawn said she’d pushed out two front feet and a nose.  Now there was nothing.  A few minutes later, I saw a hoof, then nothing.  This went on for the good part of an hour.  I went into the house again and washed my hands thoroughly, then came back out felt shallowly to see if I could feel a malpresentation.  I backed off after 2-3 inches, went back into the house, called two different neighbors with goats—both out. finally drove to my house to get the phone number of someone else.  The phone rang; things still weren’t progressing  I grabbed the phone number, called on the way: no answer.  I was just driving down the lane when the phone rang again.  "Yes?"  Shawn's voice said, “The feet and head are out, and everything’s going fast now.”  I parked the car and ran into the barn; there was the baby on the hay.  She’d been born about 45 seconds before. We checked the time he’d called and it was 8:04.  A strong doeling, she stood within 3 minutes.  And then I saw that she has an undershot jaw.  Parrot mouth. Bummer.

Bea lay down with her kid this afternoon, and though she got up a few times after that, most of her afternoon and evening was spent lying down. She ate alfalfa pellets willingly, and I gave her grain and herbal wormer as well, but she hasn't touched her hay.  I only milked out less than a quart.  The colostrum doesn’t seem as thick as last year, either, and her udder feels full—is it “meaty”?  Yet two other people thought she looked empty.  Baby is nursing well, jumping little hops, and getting stronger. She's cute in spite of her mouth problem.
Posted by Joy Metcalf at 6:01 PM