Mixing it all up

I have two young does visiting here to be bred.  They are happily cavorting with Deaglan, my Sable buck, but the wether, Dewey, was a bit overwhelmed with this sudden influx of (gasp) new goats!  I moved him out of the stall he shared with Deaglan, but that posed a dilemma--where to put him so he wouldn't be beaten up.  No use just turning him out with the rest of the herd; if 2 goats upset him, 8 would do him in!

After 2 or 3 combinations, I finally ended up putting Dandy with the two Saanen does, D'Arcy with the two pregnant Sables, and Oreo, Dolly, and Dewey together.  It's amusing how that worked out.  When I put Dewey with an established group, they just beat up on him, and being the timid soul that he is, he wouldn't push back.  Even when he was with Violet, his foster mother, and Dolly, his littermate, Cassie wouldn't let him near the feeder.  With the new mix, though, none of the three have been stalled together at night.  Result?  Everyone's out of the comfort zone and they're all getting along.


I discovered something else, too.  Dewey's a great little teaser.  I didn't know Oreo was in heat, but she soon started flagging wildly.  What a good boy, Dewey! 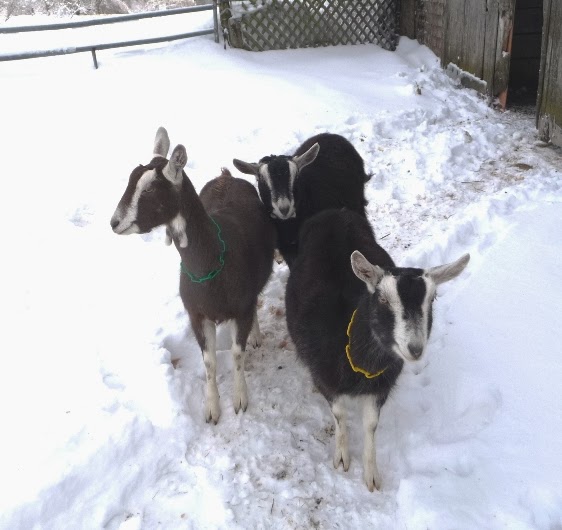