In memorium: Zoë the wonder dog. 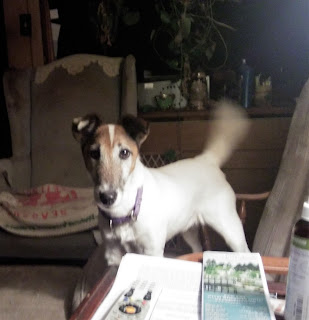 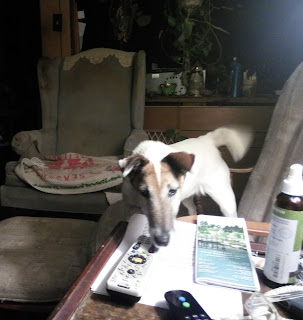 Sometimes we don't know how blessed we are. I ached when my goats left, but it was all for the best. Last Friday the house caught fire while I was away. It was an old house, over 200 years old, so it went up like a tinderbox. I lost Zoë, my lovely, happy little Fox Terrier, and I am mourning her loss, praying that she was curled up on her favorite chair and succumbed to smoke rather than flames. 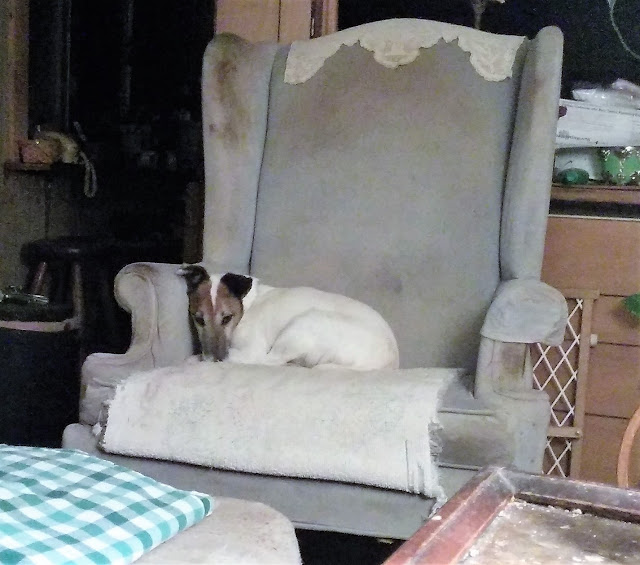 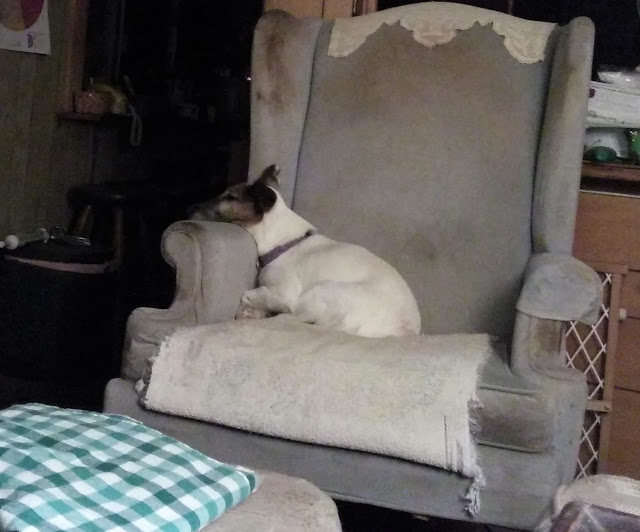 I have a lovely picture of her in my mind, racing madly through the house, jumping onto the mini-trampoline and jumping off, racing madly back, bouncing on and off, over and over again; barking when I was bouncing on it and wanting to take part, so excited. Zoë loved to bounce, bounced whenever she got excited, and oh, how excited she became at night when she could have that delight of all delights--a carrot! All my dogs have liked carrots, but Zoë loved, loved, loved them.
The blessing part is that I have no livestock to care for, no water to haul in the freezing cold, no wrestling with flashlights in a dark barn. It's hard to know what would have happened had I still had goats: perhaps I would have been there when the fire started, perhaps there wouldn't have been a fire, perhaps... But it's all speculation and counts for nothing. What is, is now, and though I mourn Zoë's loss, I will always carry her in my mind and in my heart. 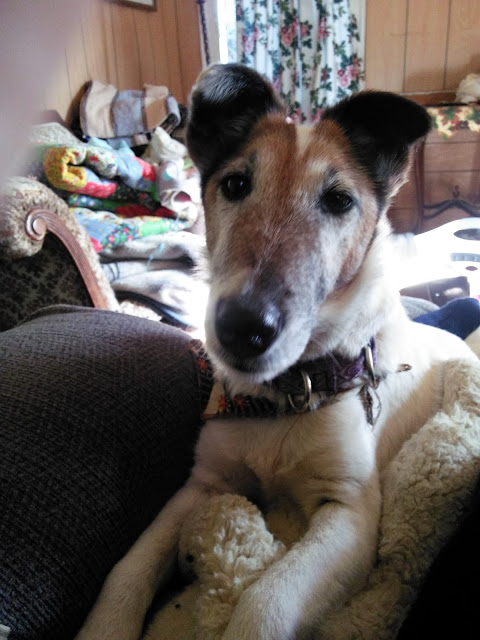 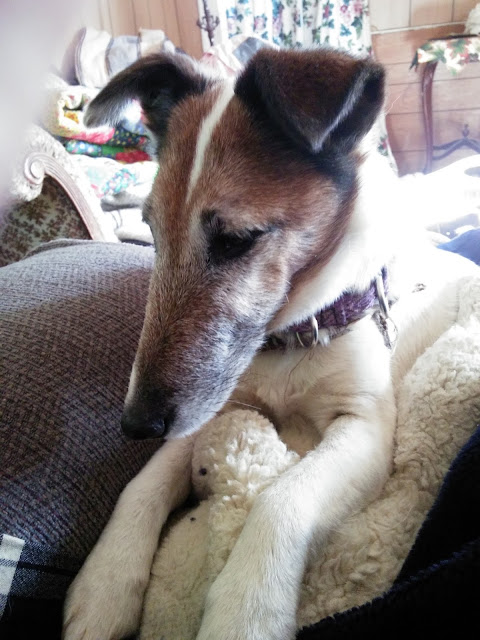 I had a dream 2 or 3 nights ago that the farmhouse burnt down. I awoke and shuddered and prayed that it would never happen. This afternoon I went in town,gone for an hour and a half. When I got back, the house was in flames, just as in my dream. I tried to save my dog, Zoë, but he blast of heat was so severe that it drove me back within seconds. I tried the other door, same result.  The only thing I accomplished was a backdraft and quicker fire.
The house is gone, my dog is gone, everything is gone. All my mother's things, everything I owned, gone. All gone. ll of it was just stuff. Except for Zoë, my beautiful Zoë. And now most of the pictures I had of her are gone, too, except for the few I had in the cloud.
As I sit here, 4+ hours after the fact, I'm only now shedding tears, as the numbness wears off. O nce the firetrucks left, it seemed I stopped holding my breath, and then it got real.
What is real?  Is anything real?  Do you see the same things I see? Do we see through the same eyes?  If I could just turn back the clock, if I could have gotten home maybe 45 minutes or even half an hour earlier, if I had let Zoë come with me. If, if, if...  None of it's real.  Only the moment, and even that isn't real.  Today is just a bad dream.  Tomorrow will be better.
When I got to my son's house, I saw the picture of Christ in the garden of Gethsemene, that I had hung there so long ago, and I thought, "I haven't suffered as He suffered.  I'll be okay."

And now there are none.

Charlie came over this morning to get Leah.  It was forecast to be a spectacular day and he would be home to see how she did and run interference if need be, so he was here early. 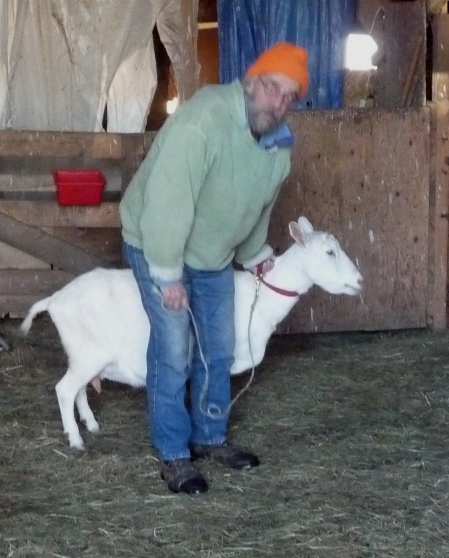 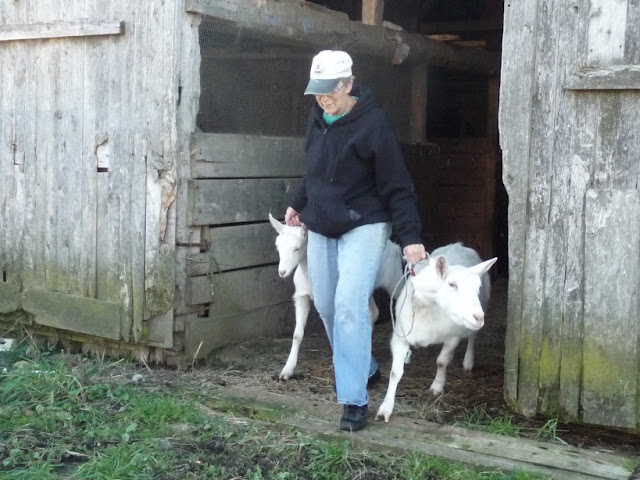 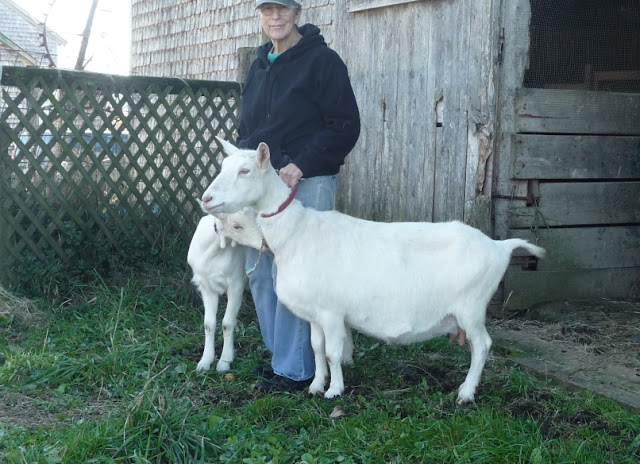 After many hugs and inward tears (the real ones came later),we loaded her in the car and then she was gone, along with half my heart. 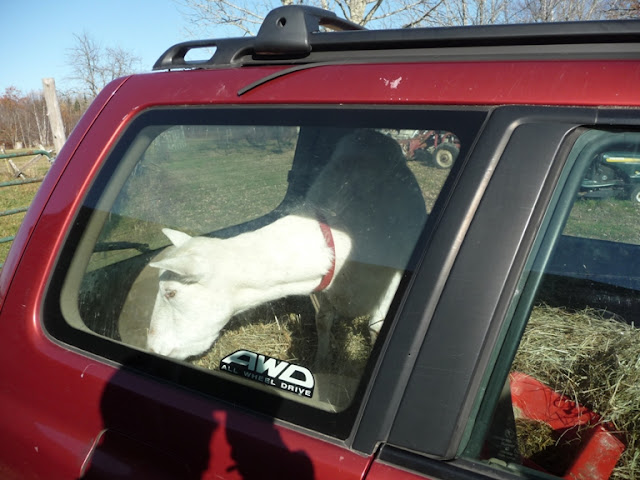 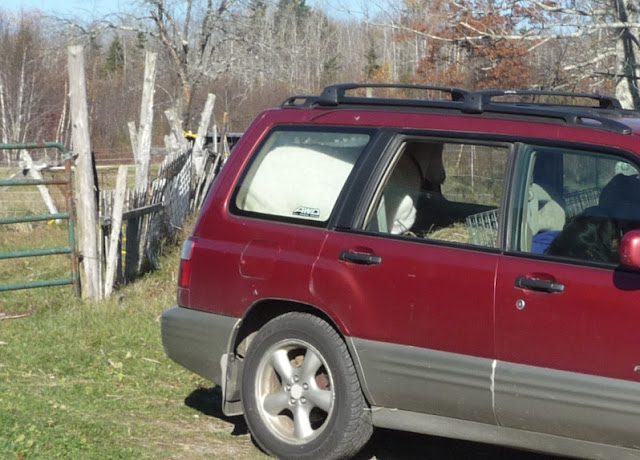 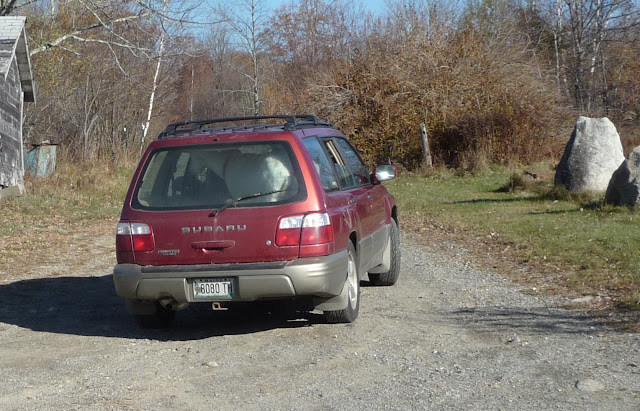 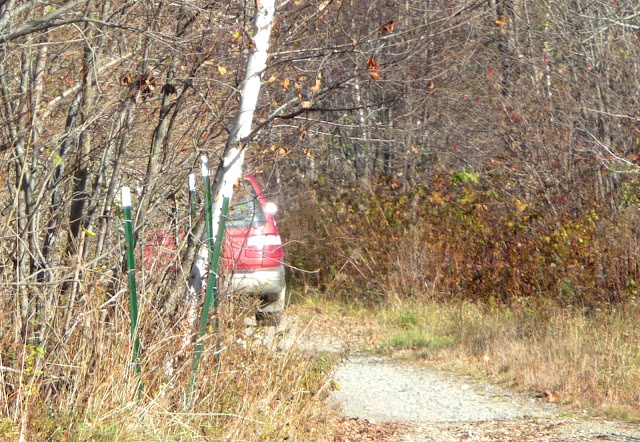 Leah is special to me.  When I got her at 4 months old, she was very skittish, and continued to be leery of everyone, including me, as she grew up.  I dont' remember exactly how old she was, maybe 2 or 3, but she got her head caught between some boards and was slowly strangling herself.  When I came out, I was sure it was too late.  Though she was still moving, she was dead weight and I couldn't get her to shift her weight at all.  I ran and got a hammer and pounded out the board that was holding her fast and pulled her head out, whereupon she staggered over and fell on the ground.  I cuddled her, encouraged her, talked to her, stroked her, and pleaded with her.  She arose and fell again, after drunkenly stumbling around for a few steps.  Her head rose and gazed around, lighted on me, and fell again to the ground.

I patted and talked to her some more, then went and repaired the boards, making sure they were now close enough that no other goat of any age could get its head through.  After a while, Leah recovered, and thereafter she did not run from me.  She knew I'd saved her life, and a special bond has existed between us from that moment on.

I feel like I've betrayed her, though I know I haven't.  She'll be wondering where she is, where I am, why her surroundings are different, though she was born on Charlie's farm.  I wonder if she'll have any remembrance of his place?

After Leah had gone, I packed up Hal and took him to his new home.  He was pretty calm on the way, even lay down after a while.  All I could see of him were his ears.

He's faring a bit better, since he's joining Leo, Dandy, D'Arcy, Fedra, and Hermione. He knows them all.  It'll be old home week.  I left him in his new digs and returned home to an empty barn, a vacated pasture. 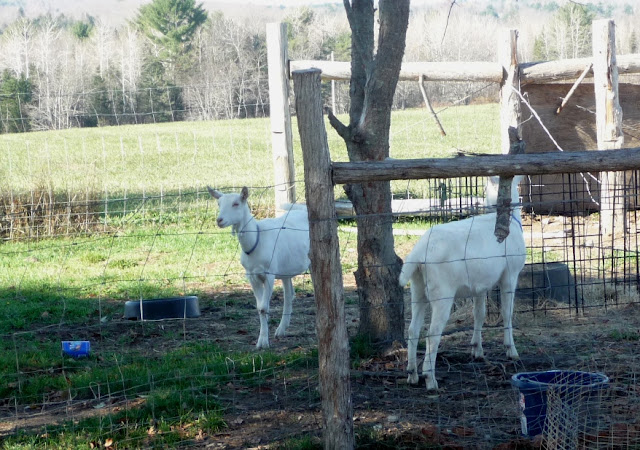 I wonder how long it'll take to stop looking out the window to watch the goats, how long before I don't reach for my jacket because it's time to feed.  It's been a long and difficult evening.  I don't feel like doing anything, no ambition at all. I was fine so long as it was daytime; now all I have is my thoughts.
Posted by Joy Metcalf at 10:58 PM 2 comments:

And then there were two...

Boerning's Fiore left yesterday.  He's such a beautiful boy.  I found myself looking at photos from when I first got him a year ago to now, and all the changes in between.  And how he has changed!


As I look at his development, I am sure that when he matures, he'll be a truly spectacular buck.  His first daughter will freshen in the spring, and then we'll see if he brings his dam's superb production capacity to his daughter, Hermione.  Of course, her dam, Crooked Shade Dandelion, is not shabby in the production line either, but what Fiore gave his daughter so far is the width to make that capacity more comfortable for the doe.  Hopefully, Hermione will be far more comfortable walking with a full udder.

Technically, Fiore is still mine.  I have leased him to Noelle Lueck of Recurado Farm.  Noelle is delighted to have him, and I am thrilled that he'll have such a good home, where he will be much appreciated.

It was relatively uneventful, really.  My friend Charlie came with his buckmobile and after only a moment's hesitation, Fiore jumped in.  A handful of grain didn't hurt as a persuader, either. 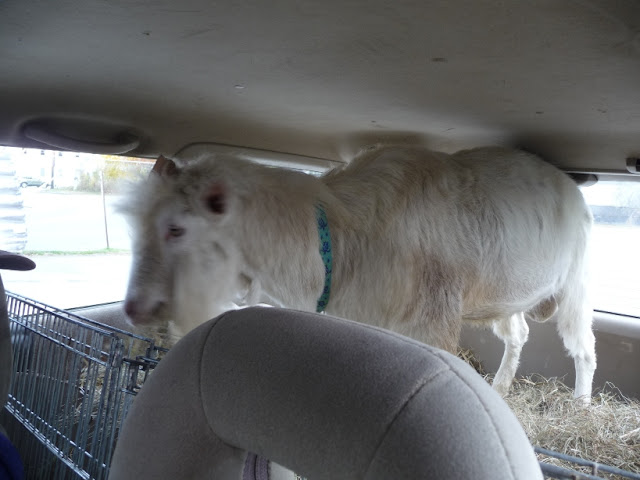 Once the car started moving, Fiore lay down and relaxed for the hour-long ride.  When we got to the meeting place, Hussey's General Store in Windsor, he continued lying down chewing cud while we all exchanged pleasantries and talked goats and politics.  When the time came to make the switch, he jumped out of the car, to the delight of some of the patrons of Hussey's, and walked calmly to Keith's van, where he took a quick look and hopped right in.


And then he was gone.

When I got home, I took Leah and Hal for a walk up to the acorns, and they came, but hesitantly at first.  It was Fiore that always led the way.  Today, they wouldn't venture from the pasture gate, not even to gather acorns.  They're not comfortable being just two.  Soon Leah will go to Charlie's and Hal will join Leo as his companion.  Perhaps being in larger herds will bring back their sense of security. Goats need lots of companions.

Posted by Joy Metcalf at 9:41 PM No comments:

As my time with my goats is winding down, I've been making time to take walks with them.  This time, I headed up the lane to a spot that I knew was loaded with acorns.  I love my goats, the way they come when I call, and their willingness to trust and follow me everywhere. 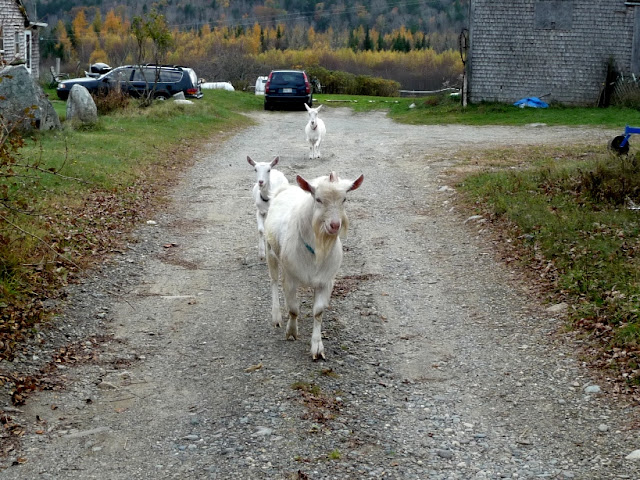 They were already out (of course), so when I started out it took no time at all for them to catch up. 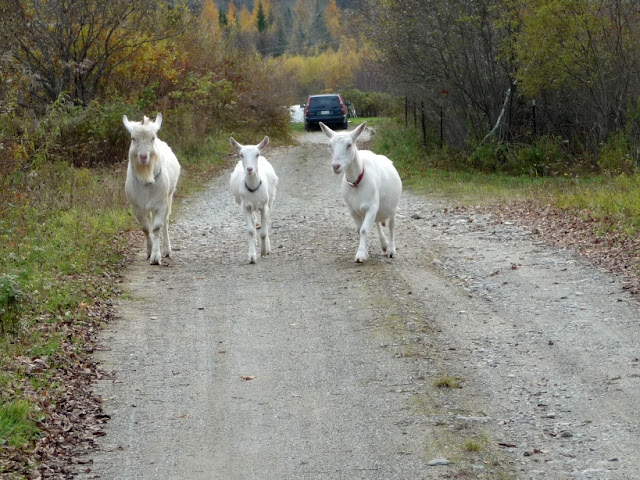 Even though the leaves have turned, there's still plenty for them to browse, and they do love nibbling along the way. 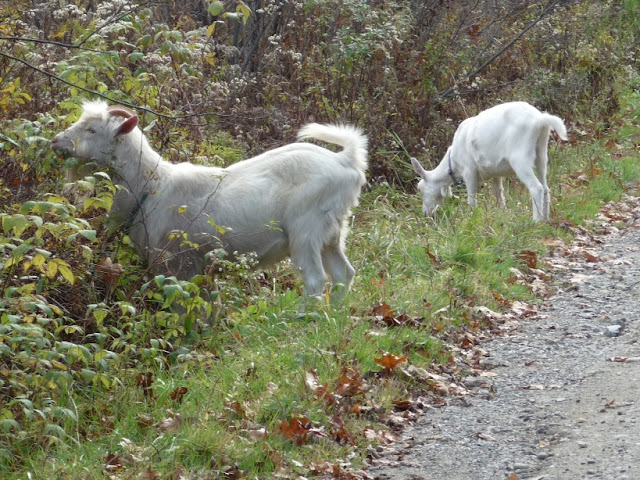 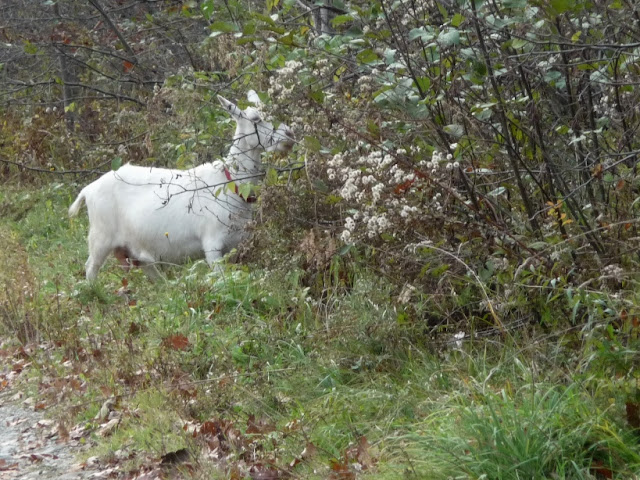 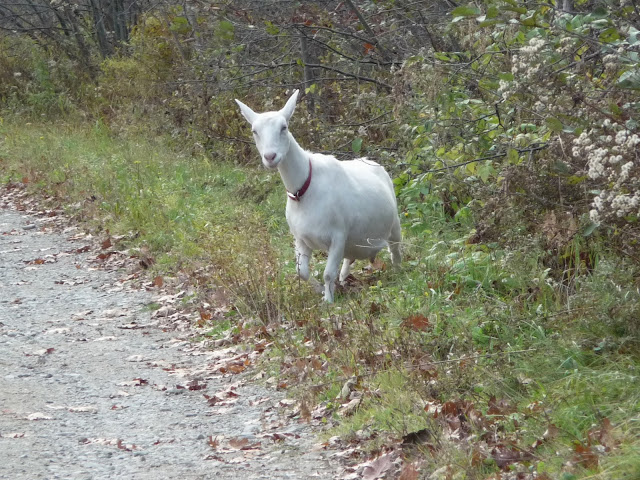 But oh, how they did love finding the acorns.  In fact, they discovered them before I could point them out. 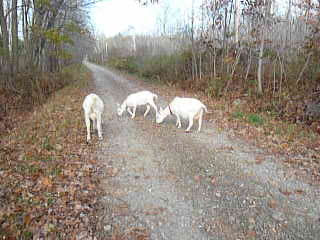 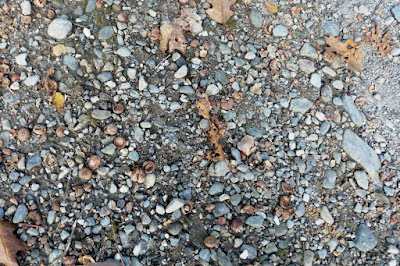 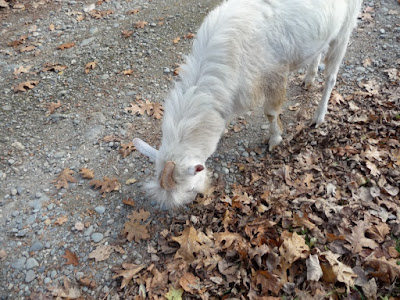 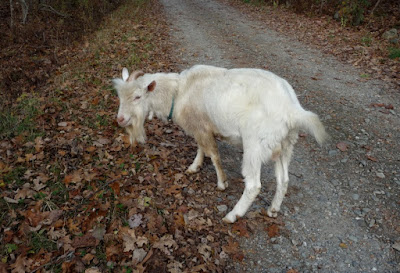 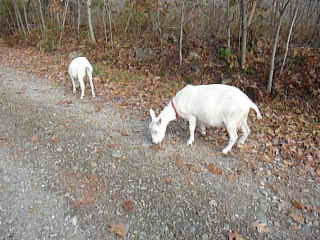 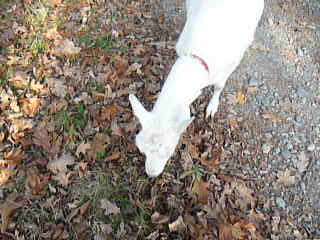 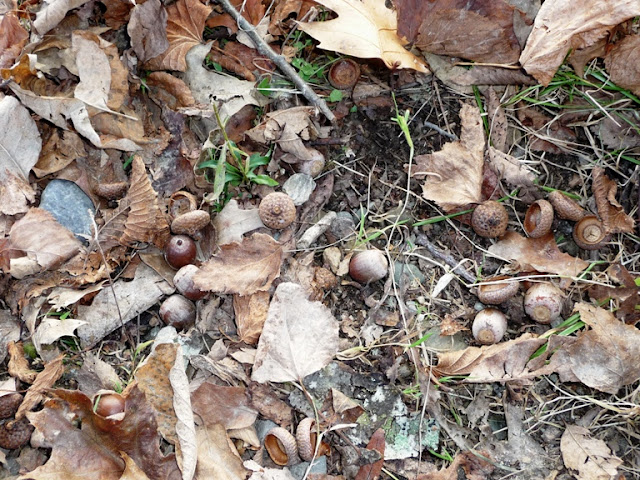 And what noises!  Snuffling, and searching, pushing aside leaves!  A treasure trove!


While they were scarfing them down, I collected a bag of acorns to feed later.  They were very appreciative.
Posted by Joy Metcalf at 7:51 PM No comments:

It is a fact that goats are hard to keep in.  I've often thought it would be far easier to fence them out of the yard and garden than to fence them into the pasture and paddock, but I suspect they'd decide that the other side of the fence was still worth investigating.

This time of year, after all growing things have either been eaten by one of the goats' forays or simply harvested in the normal rhythm of farm life, I don't get too upset when they escape from the pasture.  In fact, I expect it, because I stop trimming the fence line and the temporary electric fence gets put away, and the goats wander over to the brush and forage and then around to the road and finally into the yard.

What I don't understand, and will probably never understand, is why, since they know exactly how to get out, they can't figure out how to get back in.  Or is it just that they consider me their goat slave?

Posted by Joy Metcalf at 8:30 PM No comments: