December was a challenge, and January is shaping up to be another.  I heard (but haven't confirmed it) that it was the coldest December on record in Maine.  Could be! It was pretty darned cold, with temperatures in either the single digits or below zero much of the time.  The challenge, though, was not just the temperature.

On December 15th, heavy, wet snow fell.  Usually, Decembers aren't too bad for snow, but this time it came fast and furious.  Church cancelled because no one could get there.  The following week, freezing rain--ICE STORM!  No church, no one could drive unless they had skis on their vehices. Late afternoon, the lights flickered--and went out.  A couple of hours later, power came back.  And a short time later, gone again.

Haul out the candles, the oil lamps--whoops, no oil--, and the Coleman Lamp, which says don't use indoors. HA! I just love federal safety regulations and all the CYA instructions on everything. Of course I used it, and it burned brightly. And, since by now it was night, out came my Freeplay radio to entertain us.  I played with the shortwave bands and found a Chinese language station, probaby from Toronto, Canada, but who knows?  The vagaries of short wave are many and perhaps it was from even farther distant.  We settled on an FM station with Christmas music and read by flashlight.

At 9:30, we headed for bed, flashlights in hand.  It is so much fun waking up to the sound of puppy needing to go out, and stumbling around in the dark with only a small flashlight, shining it outside while the dog miserably goes about its business and woefully begs to come in out of the storm.

Next morning, still no electricity, but lots of snow.  Thank goodness for gas stoves.  A simple match makes sure of cooking power, and a flame ensures melted snow for water. 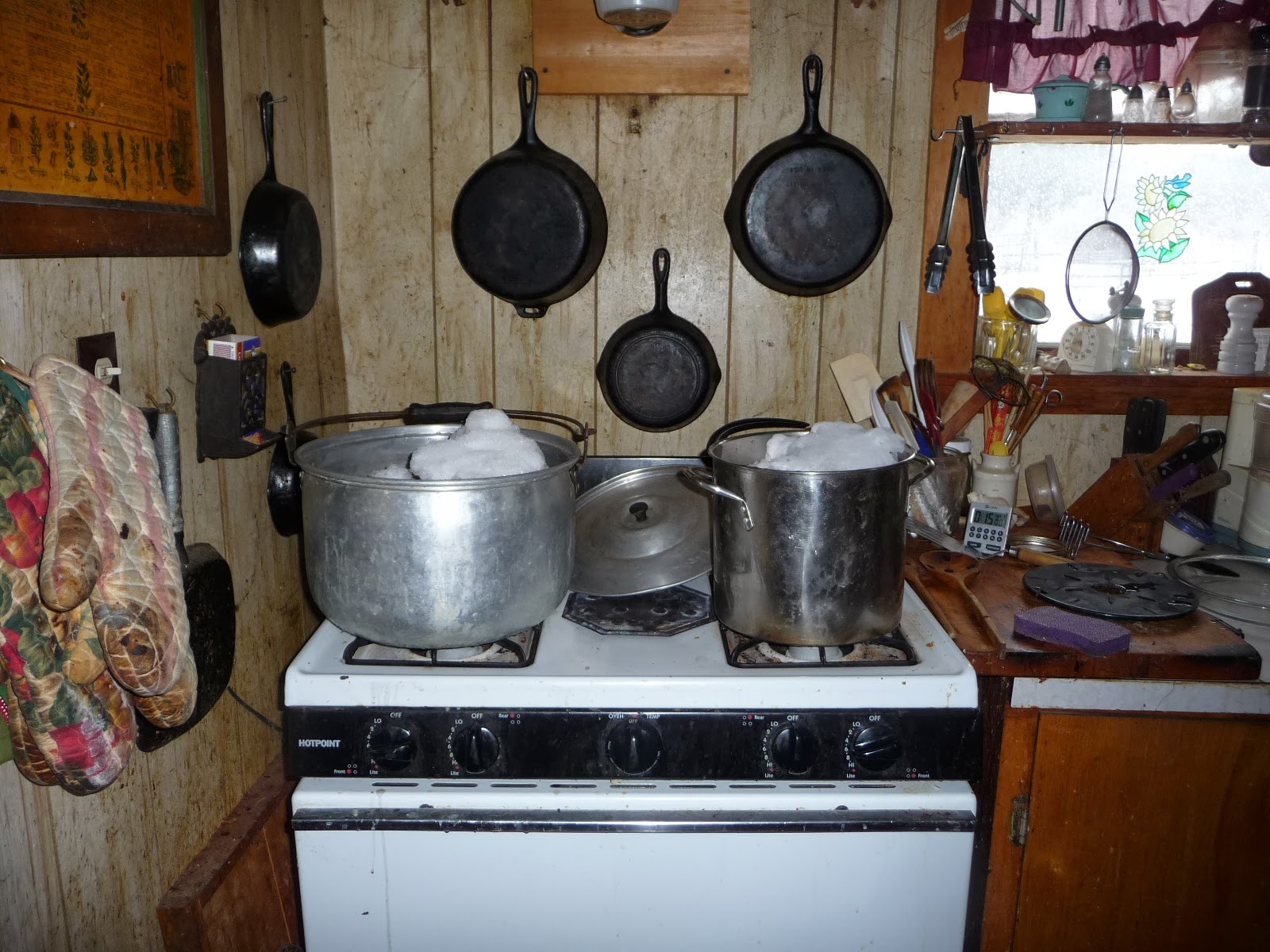 Several buckets later, I had watered all the goats and the horse.  Since the temperatures were forecast to plummet, I cleaned the ice from my car. 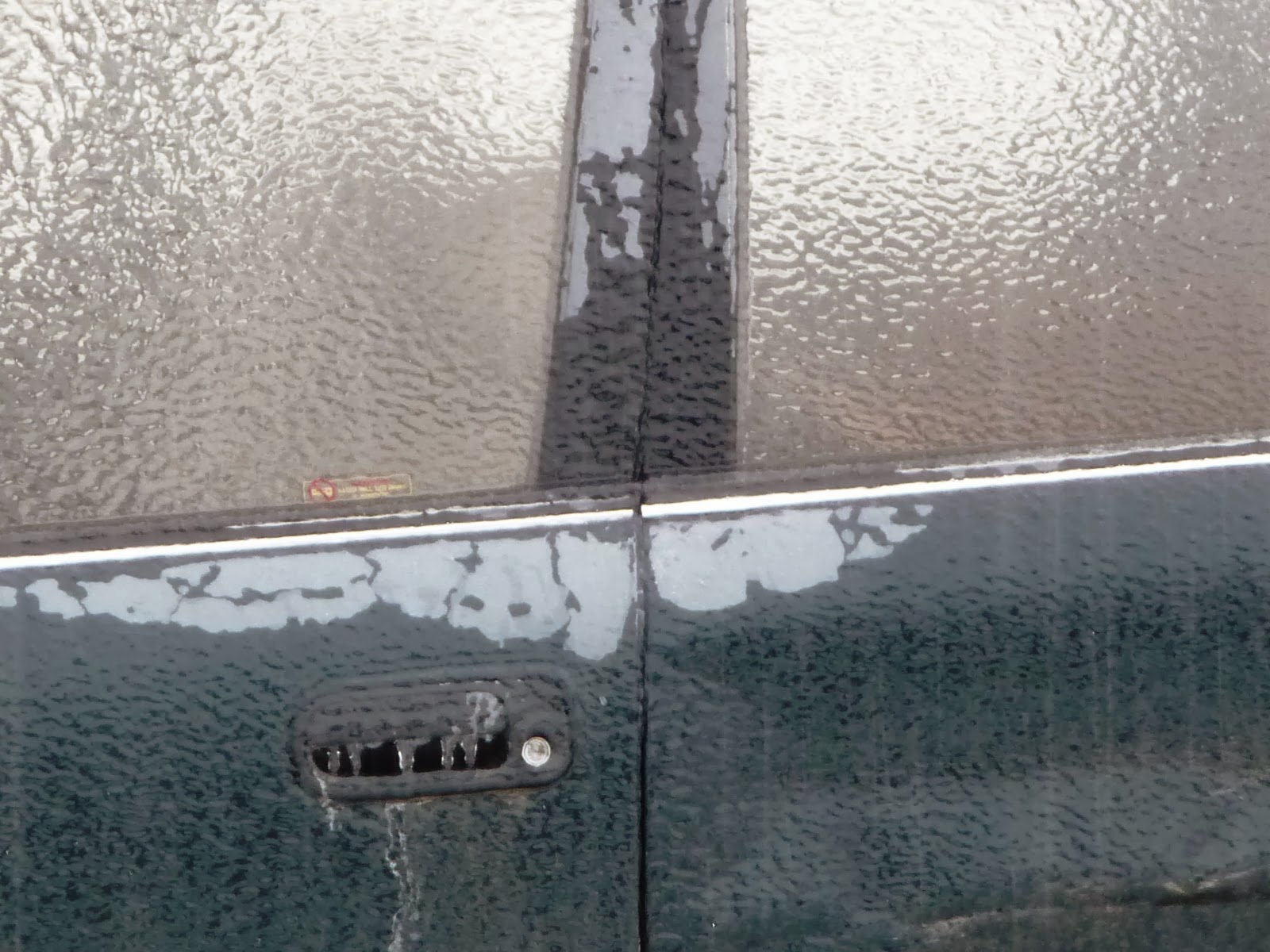 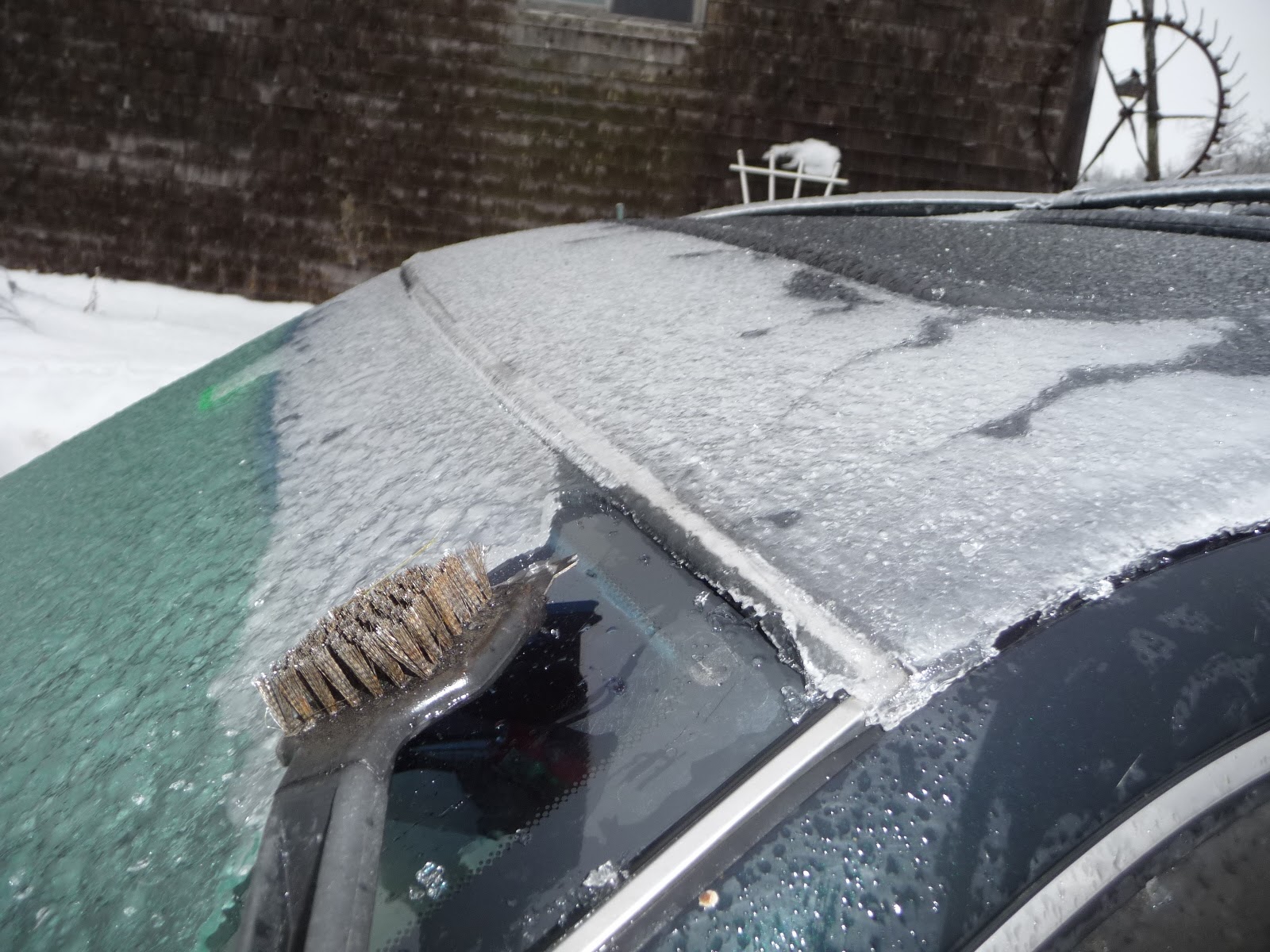 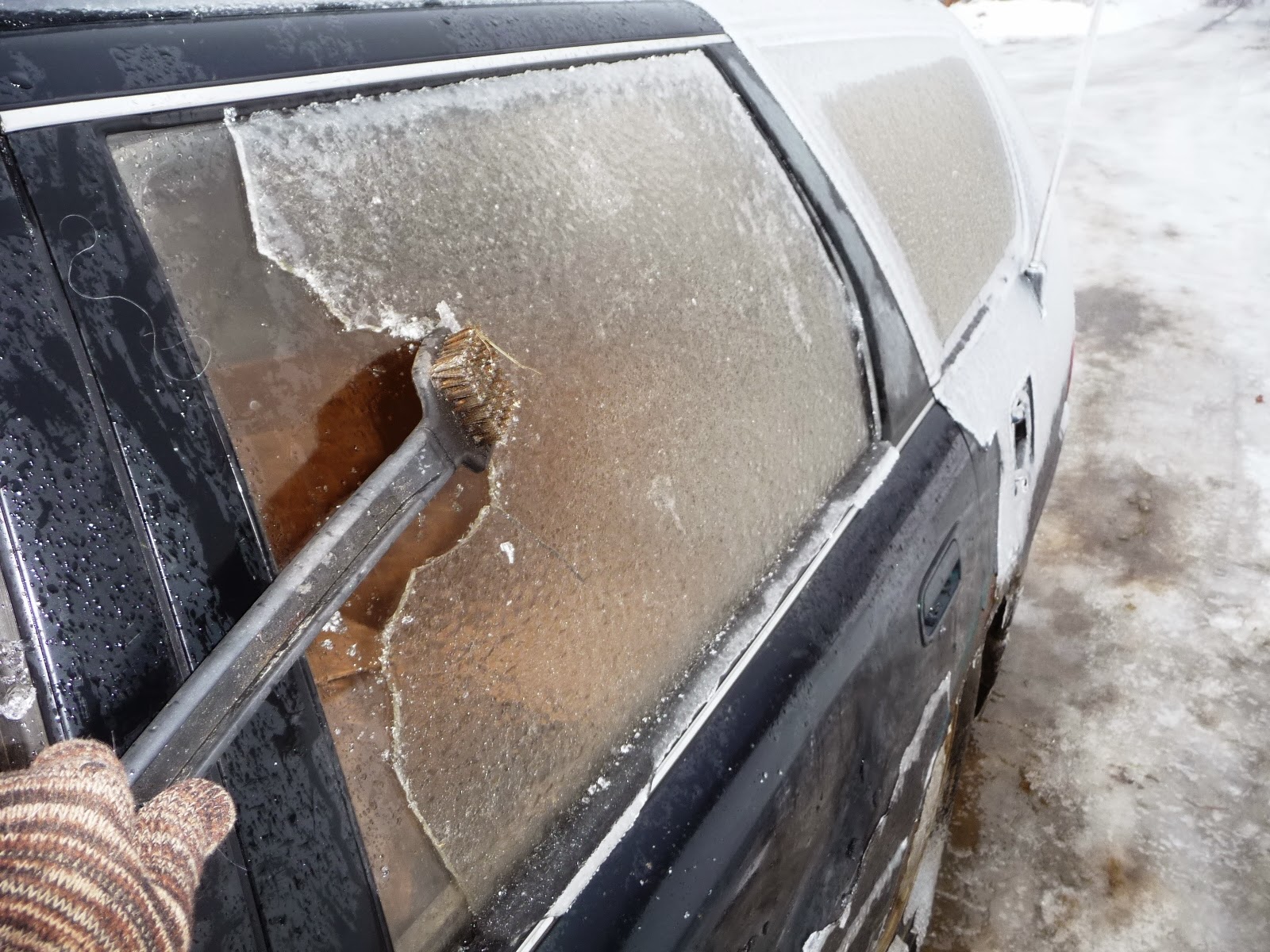 and surveyed the world.
Meanwhile, Shawn was outside trying to get the generator started, after walking down our icy 1/4 mile driveway.The next day, we had a new generator and--blessing of all blessings!--Electricity! Water! Furnace!  Did you know that if you remove the DSL filter on your phone, it will work during a power outage?  After pondering the problem for a while, knowing that telephones are usually still functional when the power is gone, I examined the phone setup and removed the filter. Voilà! The next day we had both phone and internet, so I replaced the DSL filter.

I quickly got into a routine:  Charge everything--lantern, cell phone, extra batteries, Kindle; take out the dogs and turn off the generator before bed, making very sure I have the battery-powered lantern with me and a small flashlight in my pocket; turn off the circuit breakers for the furnace, water, and electronics; in the morning heat water to break up the ice in the barn buckets.  If I had a stronger arm, I would have restarted the generator myself, but as it was, Shawn came every morning to do that.  The joys of having a son!

We didn't get power for several days, and until the driveway (the lane) was sanded, I didn't go anywhere.  Temperatures were frigid, but all my critters did well.  I don't think Angel liked being locked in the barn, but I wasn't willing to let her out for a couple of days--not until it snowed again and covered the crust.

The aftermath was breathtaking.  Though it was bitter cold, there was little wind, and even when the sky was overcast, the landscape was wondrous.  Glass trees formed crystal forests, the light dancing on prisms of ice.  Such beauty, and yet so dangerous...it boggles the mind.  The pictures below don't do justice, but enlarge them to full size to see more lovely detail. 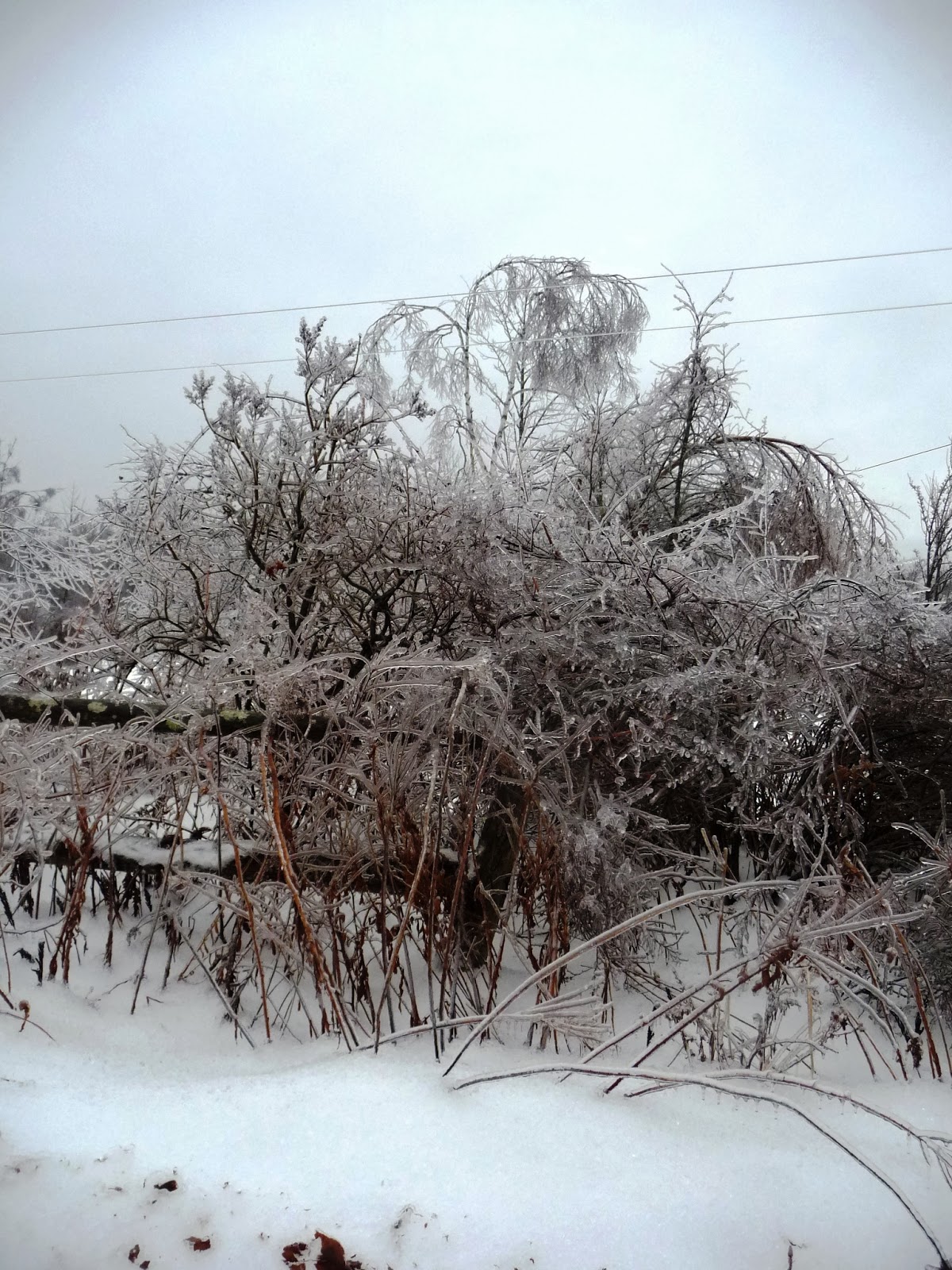 A few days later, the sun came out.


The storms and power outages have given me serious pause.  I thought I was prepared--plenty of food, plenty of water--but I wasn't.  I didn't have enough potable water, my store of candles and lamp oil were very low. I'm remedying it now, checking other stores I hadn't thought about.  One day in the future, the economy will crash.  It may be sooner, it may be later, but it cannot be sustained.  It's time to prepare.