Life has been busy in the past few months and I've let my blog slip.  Ah, well, today's another day and I'm here now.

It's been an exciting fall.  All of my kids exhibited symptoms of meningeal worm, aka brainworm or deerworm.  I thought they had some kind of mange, but it didn't respond to anything.  I finally called out the vet, who looked at the symmetrical bald spots on one young buck and declared it "brainworm".  The larvae travel through the spinal column, damaging nerve endings and causing the symmetrical damage.  Recommendation:  5 days of Safeguard and 5 days of Ivermectin.  I was reluctant, until my little wether, Dewey, began staggering and falling. As I researched for more information,  on page 15 of a file that I found at Cornell, I saw the exact type of lesions I was seeing on my doelings.  End of hesitation.  Within 2 days Dewey was better.  I've been watching them closely, and recently  I noticed that Deaglan and D'Arcy were showing those bare spots again.  Five days of Land of Havilah herbal wormer 3-4 times a day for a week.  My test--the hair growing in again, no unsteadiness of gait.

It's been  wet year; snails have invaded everywhere.  Here's the life cycle:  Deer are a dead-end host for meningeal worm.  The meningeal worm completes its life cycle, passes the eggs out of its system, and they're little affected.  Along comes a slug or snail, ingests the eggs or larvae, goats or sheep ingest the larvae, and they migrate along the spinal column or into the brain.  Until a goat is a year old, the blood-brain barrier is very weak.  It's no surprise that none of my adults were infected.

Watching all the hay wasted always has me looking for new solutions.  I've been thinking about a slow feeder for a couple of years, and thought seriously about putting a metal grate in the horse's feeder.  Every time, though, I'd watch a goat jump in there, and just knew someone would get a leg caught, or worse.  I finally found a hay net, made to be a slow feeder--the N.A.G bag. After my usual seemingly endless dithering, I ordered one.  It arrived a couple of weeks ago, and even the goats like it.  Sometimes I hang it, which my goats love, but Angel likes it better on the ground. 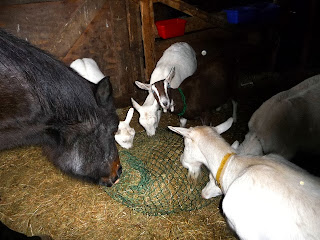 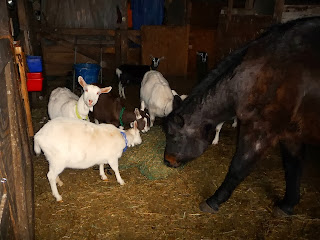 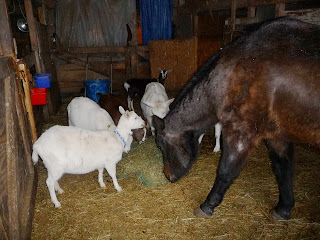 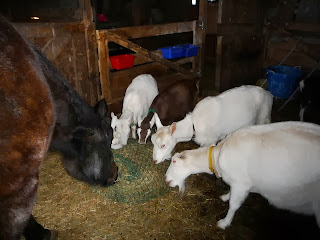 This morning I found the hay net half in the stock tank immersed in water, and half on the outside.  Angel was out, probably too disgusted to try to eat.  I took it out of the water, let it drain on the barn floor for a few minutes, than laid it out on the floor.

I'm going to order two smaller ones for stalls.