I had to make a decision:  go to the Farmington goat show and compete, a one day commitment, or go to the Common Ground Country Fair and be there for three days.  I opted for the Common Ground Fair.  On Thursday September 24th, I loaded 2 adults and 2 kids, all Sables, into the back of the Toyota Camry Wagon and off we went.  I had been there on Wednesday, preparing the pen, bringing hay, grain, chair so I could sit down occasionally during the weekend, and feeders. They settled in well, and I left, confident that the volunteers would watch over them.

The next morning I arrived at 7:30, unloaded a few things I'd forgotten, and then found a spot in the parking lot.  I was amazed!  The fair didn't open until 9:00, but the parking lot was already filling up.  It felt good to show my exhibitor's pass and walk past the long lines. When I got to my goats, I felt even better; they were calm and settled in, interested in everything that was going on, and getting along with each other (happily for Fedra, the newest addition to the herd).  I gave them grain and Chaffhaye, changed their water, filled their hay bags, and waited for the rush.

We were next to Tramps-Rest goats.  Charlie Hopkins has three breeds of goats, all the Swiss breeds: Toggenburgs, Saanens, and Oberhasli.  My Sables completed the lineup of Swiss breeds, though technically they are colored Saanens, not a separate breed at all.

And rush it was!  Busloads of students from schools in the area, all wanting to pet all the goats.  Of course, the CGCF staff had put up signs that said "Fingers look like carrots!  Do not touch the animals.)  Well...that may be true for some animals (I certainly wouldn't stick my hand near a pig), but goats don't have upper teeth, and though they nibble on clothes, papers, and anything else that's close by, they're not generally biting animals, so I allowed the children to stroke and pet them. 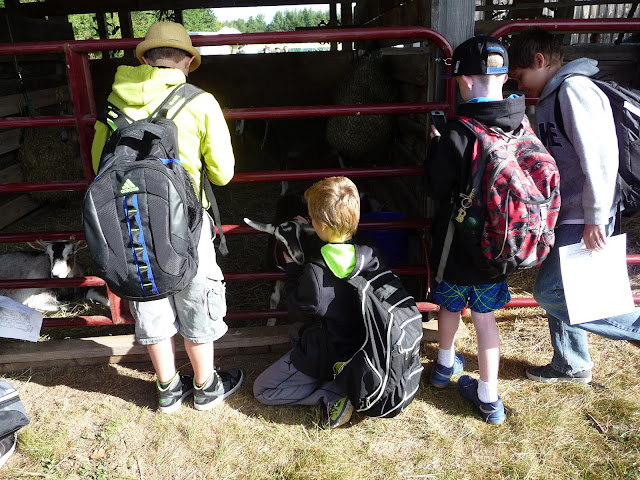 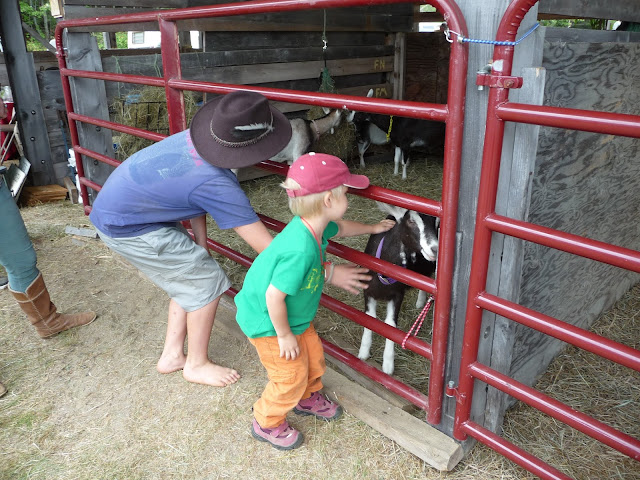 Fedra was the poster girl for Sables, schmoozing at the gate from the beginning, though occasionally the crowds would thin and she'd head for the back to rest.  Being the center of attention is exhausting work! 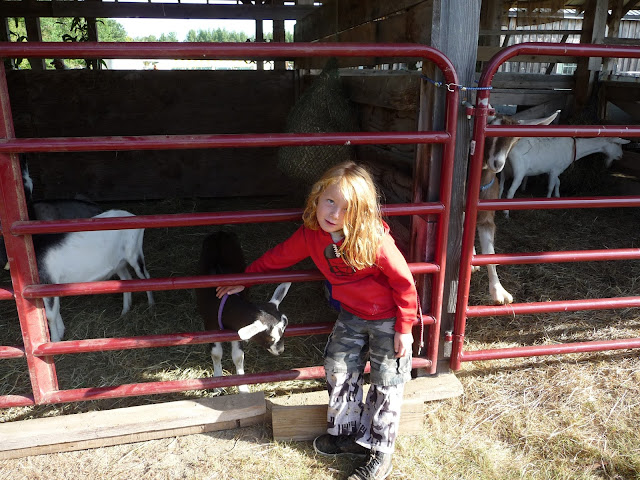 Dolly stood in the center of the stall, interested in everything, but still not wanting to venture forth. Occasionally she'd stretch forth her neck, just barely touching someone's outstretched hand, but she just couldn't quite bring herself to do more. 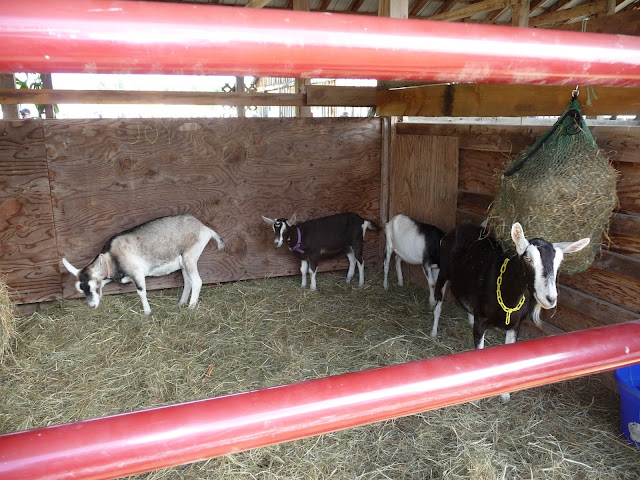 Hannah stayed at the back of the stall relaxing for a while, gradually coming closer and closer, nibbling on hay near the gate, or lying just out of reach, until noonish, when she just couldn't ignore the attention Fedra was getting.  She butted Fedra out of the way so she could get her share.  Fascination?  Well, she was fascinated by everything that was happening, but couldn't bring herself to do more than watch.

Day 2 saw Fedra and Hannah competing for attention, but by the afternoon, Dolly had gotten braver.  I fed them all some apple pieces and that was the cue for Dolly to abandon her fear and (cautiously) take pieces from others' hands.  Fascination occasionally came to the gate, but always looking to her dam (Dolly) for reassurance.  Olivia, my helper, ran interference for Fedra.  When Dolly and Hannah ran her off, Olivia would just take her out and let her get personal attention.  So there!  Fedra really was the hit of the Sables.  The biggest problem was that she was ready to wander around and say hello to everyone. 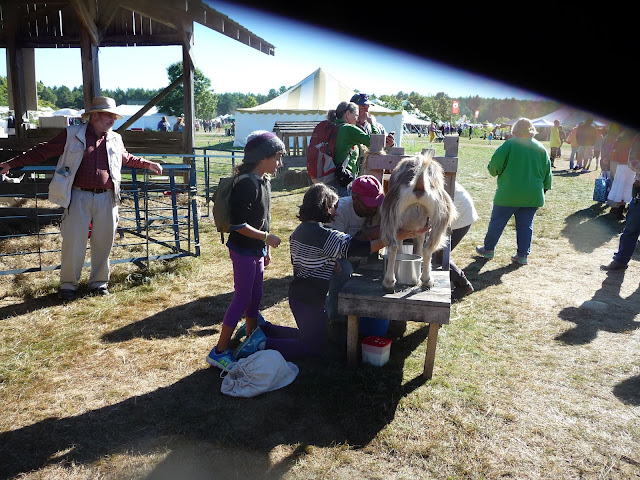 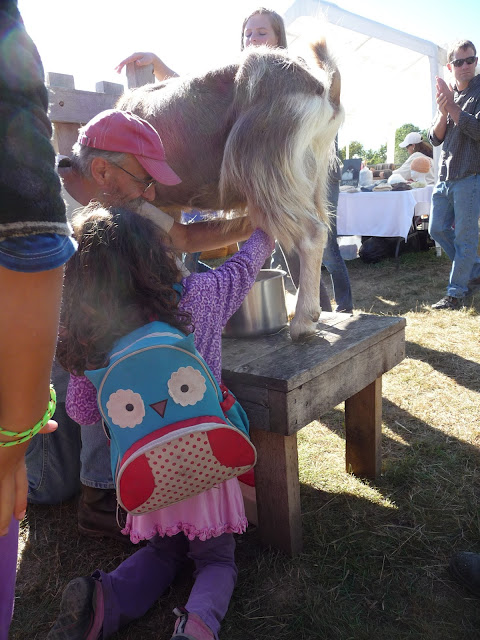 Day 3 was slower and quieter, still lots of people, but not nearly as hectic as the previous two days.  I do believe my goats had a good time!  They were engaged, friendly, and got into the whole fair atmosphere, loving the attention, ooh's and ah's, and even looking for people during the lulls, just like Charlie's old pros. 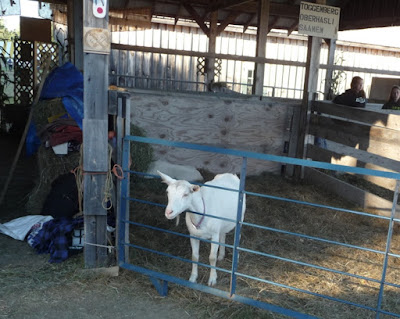 After trekking in from the public parking lots for 2 days, I discovered that there was a parking area just for livestock exhibitors close by, an easy walk.  Ha!  I should have asked sooner.  At least I was able to park there the last day, making it a lot easier to pack up my goats and go home.  They had a lot to tell the others when we got back to the barn.  I can just imaging the conversations:  "And then this little girl came over...  And you should have seen..."

The fair was a lot of work, but a lot of fun, too.  I may just do it again next year.