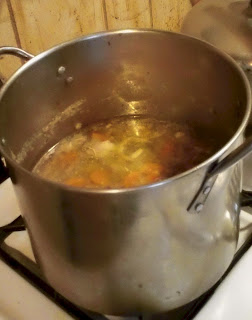 A few days ago, I pulled the last of the turkey from the freezer and made turkey soup.  There's only so many times you can eat turkey soup without despairing, and even though we'd eaten it twice already by yesterday, I really didn't want to toss it all, or even feed it to the chickens. I considered that It just needed... um... something to zing it up.  But what?  I thought about it a while and though of Indian spices.  Hmmm.  Google search for "turkey soup spicy".  FOUND!  Turkey mulligatawney soup!  I found two different recipes, tweaked them both, and came up with my own.

Mulligatawny soup does not have carrots and celery in it.  My base was an already-made turkey soup with onions, carrots, and celery, but hey, I didn't know I was going to make muligatawny soup!  You know, it didn't hurt it at all. 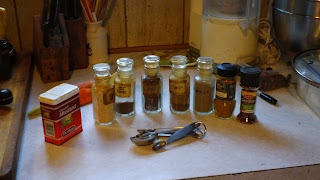 And 1 tsp of my Secret Ingredient.  It was secret even to me, as I put it in a baby food jar a long time ago and I'm a bit fuzzy on what it is.  That is, I'm reasonably sure it's either asafoetida or garam masala.  The last time I opened asafoetida, it was overwhelming.  A pinch goes a long, long way.  It's one of those spices that must be used judiciously or it will ruin the dish.  Garam masala, on the other hand, can be used in quantity.  I added a teaspoonful and all was well.  At this point, I'm sure it was garam masala.  Perhaps I ought to say, I have no doubt it was not asafoetida. 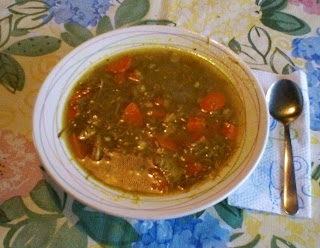 I then added garlic powder and salt to taste, left the soup to simmer for 20 minutes, and then served it up for lunch.


It was delicious, definitely not your run-of-the-mill Thanksgiving-turkey-revisited soup.