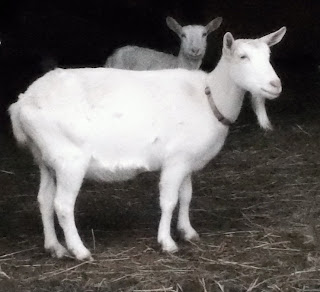 Beatrice was bred to my Sable buck on the 6th.  She's so different from Leah!  Leah screamed and hollered and left no one in peace.  Beatrice just gives plaintive, sad little bleats, as much as to say, "Oh, poor me! Woe is me!  I feel so baaaaaad."  Presented the buck rag, then off we went in the car again, Beatrice gamely standing for the entire 35 minute ride.  Was she a horse in another life, I wonder?  She doesn't seem  to think of lying down.

No matter.  She thought Ike (Patina M&M Eye Candy) was cute as can be, and he thought her divine.  I left her there overnight, picked her up in the morning and oh! my! she just reeked of buck!  The other does gathered 'round her when she entered the barn, and I'm sure they all had a nice chat.

Today's the 13th, and Leah hasn't presented any signs of heat, and I doubt that Beatrice will again, ether, but I'll be watching for them.  Now, Sanuba (aka Snub), on the other hand, is due for heat in a couple of days (my does did NOT synchronize this year!), but she won't get to meet Ike.  Instead, I'm measuring her milk to see when I can put her on one milking a day.  So far, she hasn't dropped to half of her peak level yet, so it's still twice a day.  I'm sure she doesn't mind, though:  she gets fed grain twice instead of once, not to mention the occasional apple or carrot. 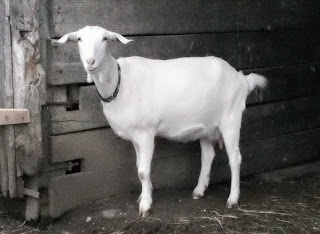 Speaking of odd treats, Snub is the only one of my goats--ever--that doesn't like fir or pine boughs, or the occasional piece of bread.  She marches to the beat of a different drummer, probably one from the Nubian desert.  She's more aloof in other ways as well, and, while none of he goats like walking in the mud, Snub will wail about getting her feet dirty.  I've actually had to lead her through the barn and out a side door to get her to the pasture, because she just won't walk through the mucky stuff.  Thank goodness for frozen ground in the morning. She's able to trip out to pasture without mussing her dainty feet.  I chuckle, tongue in cheek, but Sanuba really is my most elegant doe, regal and calm.  Beatrice is the Queen.  Sanuba is the Empress.