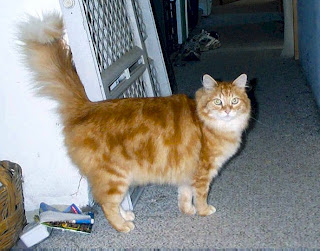 A while back, oh, maybe mid-October, I went looking for a Maine Coon Cat.  I had had one prevously, an orange and white tabby, Copper (short for Copernicus).  After two years, it was time for another Coon cat.  I put out feelers; I mentioned it to friends.  Shortly after, a good friend called me, and said, "I saw an ad for a Maine Coon Cat in Bangor."  Happily, she had the phone number, and when I called, the owner said, "come on up".  Off I went to check him out.  He was perfect:  a 3 y.o. male orange Coon cat.  He looked at me, let me pat him, snuggled up, and I brought him home. As I left, I asked, "Oh, by the way, what's his name?'  "We've been calling him Ninety-nine," he replied.  Ninety-nine?  Odd name for a cat.  That just wouldn't do.  So, as I often do with my animals, I asked him what his name was.  I always figure I've probably got it right if it's something I'd never think of myself.  The name?  Jethro.  Not a name I'd have chosen!  I asked again over the next few days, trying out different names.  Nope, it always came back to Jethro.  Jethro it is, then.

Some people associate the name with The Beverly Hillbillies, but I think of Jethro, the father-in-law of Moses, a strong patriarch who gave Moses advice on how to handle the recalcitrant Children of Israel.  Jethro the cat is not a comical character.  He's independent and willing to tell you just how things can be improved.  And like Jethro of Biblical times, he is able to make his presence known without causing hard feelings.  Sassy, my older cat (whom we've affectionately called "Sassy the b*" for quite a long time) always takes umbrage at other animals in the house.  When I had 3 dogs and 7 cats, she was a terror, and never settled down until she was the only one left.  Did I mention she's rather long-lived?  At any rate, Jethro just wouldn't take offense at anythiing Sassy did--spitting, hissing, batting at him--he just looked at her and went back to whatever it was he was doing.  This was something new in Sassy's experience, and she really didn't quite know how to handle it.  In a very short time--a week or two, she stopped  considering him a threat and actually sniffs noses with him occasionally. For Sassy, this is an amazing accomplishment.

Jethro is an outdoor cat, no doubt about it, and, like most Maine Coon Cats, a wonderful mouser.  He's at his happiest when he can slip in and out the door at will.  Home is a place to eat and curl up by the wood stove on a particularly cold or wet day.  When he's in on one of those days, or at night when I refuse to let him out, he climbs on my lap, purrs contentedly, and goes to sleep.  Just the kind of cat I like.  Not too demanding, but very affectionate on a limited basis.  And I haven't had a mouse problem since he came. 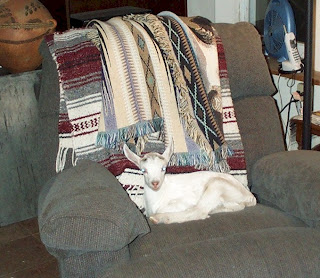 Emily is another of my animals who told me her name.  I got her at five days old from a dairy farm.  I'd actually been looking at another Saanen doeling on the far side of the pen, bigger, broader, possibly even show material.  That doeling steadfastly refused to come to the front, and another little doeling steadfastly refused to go away.  I finally picked up the pesty one with the intention of looking at her horn buds to see how well-developed they were, figuring since they were all the same age, it would tell me how far advanced the others were as well.  As soon as I picked her up, I found myself saying, "I guess I'm taking this one."  It was a bit of a shock. I hadn't intended to take her, but I there didn't seem to be any doubt that she was going home with me.  My friend Laura was with me, and she drove home while I held the kid in my lap.  I studied her for a few minutes, and mused, "I wonder what I should call her?"  The next minute, in wonderment I was telling Laura, "Her name is Emily."  Emily?  Where did that come from?  From Emily, actually.  No one will ever convince me that she didn't tell me her name. Like Jethro, Emily is not a name I would have chosen.

There are other aspects of names.  One must always beware of what name is given.  I bought a Trakehner filly once, a Vincent daughter, a redhead.  I called her Freedom's Fire.  Big mistake.  Freedom joyfully broke out of every fence and went through every gate that she could.  She loves freedom, she revels in telling you so.  I sold her as a five year old to a woman in Missouri.  She has ruefully agreed that Freedom's name fits her too well.  However, she produces beautiful babies, so she has a home for life.

I could go on about names--how Angel came by her name, how Magic's name got changed and why, but that'll have to wait for another day.  Suffice it to say, names are interesting things; they have power, and sometimes they have histories we're not even aware of.