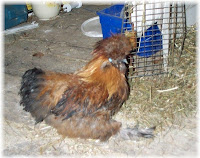 Last April when I bought some day-old chicks locally, I was offered a Silkie with a flipped foot.  At the time, we weren't sure if it were a pullet or a cockerel, but I took it, hoping it was a pullet.  Nope, a cockerel, but so darned cute that I didn't care.  I suspected that as time went on, but when he started crowing, it was a sure thing. The problem is, that all my other chickens are full size, and they sometimes pick on him unmercifully.  He's housed in his own little area in the tackroom, and locked in a cat carrier-cum-private-coop at night. During the day he gets around surprisingly well on that flipped foot.  He can't roost, but he moves well enough.

I call this little bantam SilkieLou (if it had been a pullet, the name would have been SilkieSue), but he actually has many names.  My son calls him AfroCluck, my sister calls him Buckwheat, and her friend Bill calls him Afro or Little Buddy.  My mother just calls him "that funny looking chicken".

SilkieLou actually comes when called--usually.  Or at least, he croons when you call so you know where to find him.   He's a great favorite with everyone at the farm, and Bill, who is a city boy, can't believe that he thinks a chicken is so cute. 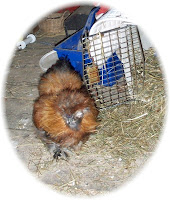 A few weeks ago, SilkieLou disappeared.  We called, we hunted, we looked in every nook and cranny, behind every box, under every overhang.  We looked outside, under bushes, beneath vehicles, sure that he couldn't have gotten out of the barn, but not wanting to take any chances of overlooking him.  We called, we listened, but to no avail.  After two nights, we were sure he was gone forever.  48 hours later, the Silkie showed up, hungry and thirsty.  The whole household celebrated!  Such can be the effect of a lowly chicken on the spirits of us all.

I'm looking around for a Silkie pullet or two now.  I think he deserves to have company, and maybe his own little haram.
Posted by Joy Metcalf at 7:22 PM