D’Arcy kidded on Sunday the 22nd.  I thought Cassie would be the one to kid, since she had her front legs elevated and was yawning and stretching.  Her ligaments had been soft earlier, but were firm when I checked them late afternoon and evening.  I had given them both Pulsatilla that morning and put hay down in the stall to kid on. 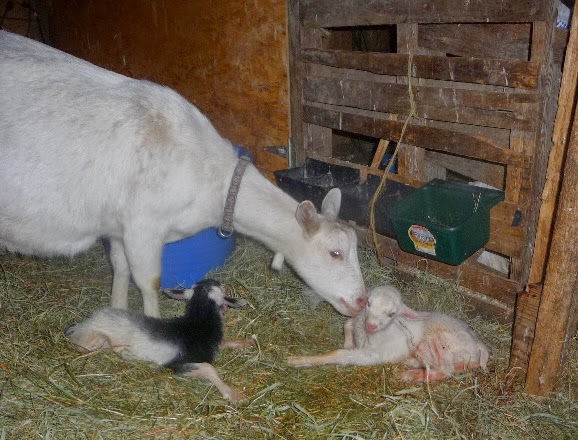 About 2:00 in the afternoon, my computer alarm reminded me to clip their tails for kidding.  I ignored it for 15-20 minutes, and when I finally went out, D’Arcy had a kid on the hay, licking it clean, just born, still covered with mucous.  I ran into the house, grabbed some towels, phoned Olivia to tell her there was a kid born and to come over, and by the time I got back to the barn, the second kid had dropped onto the hay.  The first one, a doe, is marked just like Mime; the second looked to be all white, another doe.  Later we could see that she has a small black spot on her left side, but hard to see unless you ruffle her fur.  Two doelings, both lovely, the Sable born about 2:36 and the Saanen born 5-10 minutes later. 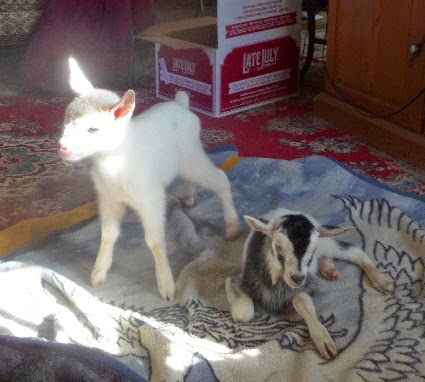 Olivia and Lynne showed up shortly afterward and we all went out to tend to them.  The Sable kid found the teat and latched on; the second didn’t do as well.  Suddenly Lynne or Olivia said, “their ears are hard, is that normal?”  I didn’t think too much of it at first, but when I touched the ears, the moisture of birth was freezing on the ears.  Oh, crap! All I could think of was frostbite if we didn’t act quickly.  Lynne was ahead of me.  She was already packing up the white doeling and sheltering her under her coat. They were both half way to the house when I came along with the Sable doeling.

After the two kids were warmed, fed, and completely dry, I took first one, then the other, back to the barn.  It had been a couple of hours, and D’Arcy was munching on hay.  She hardly noticed until the Saanen kid started to bleat.  She replied and came over to start nuzzling and licking her.  A while later when she woke up, I brought out the Sable. D’Arcy kept sniffing her and checking her out, as if something weren’t quite right.  She let her nurse when I held her, but wanted to move away.  As time wore on, whenever the Sable kid nursed, D’Arcy would bite her tail or her butt.  I finally took her back to the house.  An hour later, I came for the second.  It’s bitter cold out there, and I wanted them together. I found my Sepia and gave it to D’Arcy, hoping it would change her attitude.  It was too cold for them out there, with a low of around 8° F.  I don’t really mind bottle feeding them, since D’Arcy will be on milk test and they’ll need to be bottle fed on test day.

The next morning I repeated the Sepia once.  By afternoon she was letting the Sable doeling nurse and by evening she was actively taking care of her..  These are the only kids that have names so far:  Crooked Shade Fanciful, or Fancy Free (haven't quite decided yet) and Crooked Shade Fiona (or Feona).  who is now wearing a turquoise collar to tell her apart from the other white kids. 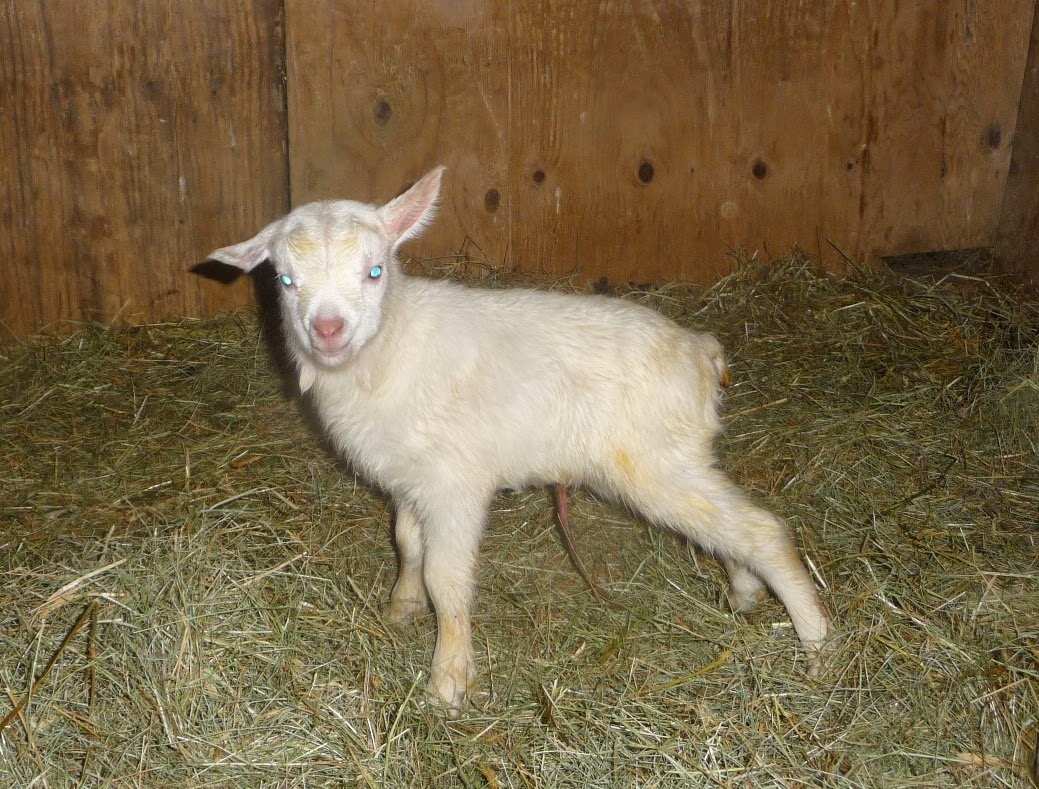 I spent most of the wee hours of the night of the 24th getting up every hour to check Dandelion, who thankfully did not kid in the middle of the frigid night. A small show of blood to let me know things were starting to happen had me worried that she was going to kid right away, but—sweet girl!—she held of until late morning.

I was quite exhausted, but didn't dare take a nap. Every time I went out there, Dandy looked at me quizzically, as it to say, "What are you doing here again? Do you think I can't do this without you?"  Ah!  but when they finally came, she was glad to have me there, looking at me pleadingly.  A first time mom who didn’t know what it was all about. 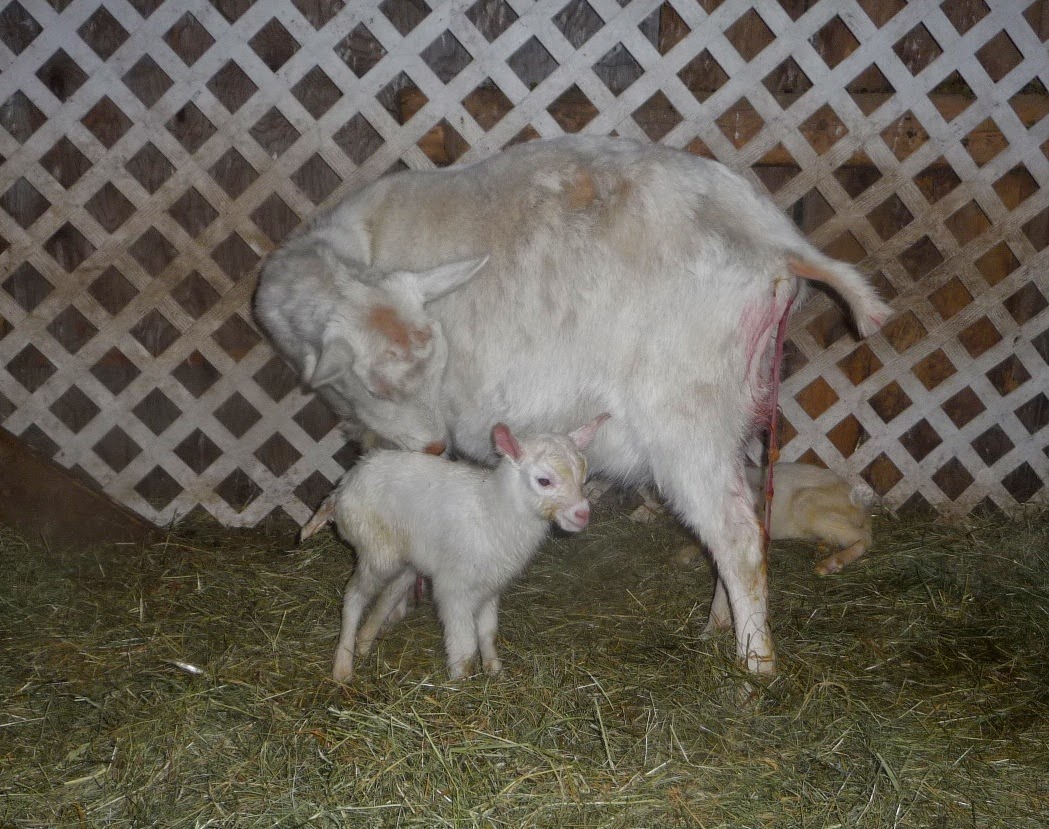 A buckling was born at 11:10, a doeling at 11:22, both completely white.  This is the doe that looked so skinny a couple of weeks ago, but she plumped out the last week or so. She had twins hiding in there, but I don't know how.

Dandy’s a wonderful mother, right from the start. She licked and cleaned them, took care of them, pushed them toward her udder, fussed over them.  No rejection on her part!  When I took them in for the night, because it was much too cold still to leave them out, she was upset, and both relieved and ecstatic when I returned them the next morning—after 10:00, when the temperature had risen above 20°. 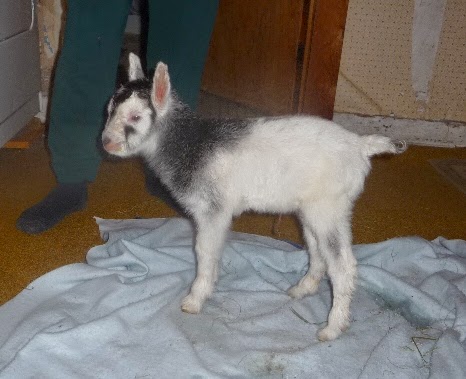 Dolly’s experience as a first freshener was traumatic, to say the least.  After watching her pass a lot of fluid and goo, watching for over an hour, and seeing that she was not progressing at all, I called the vet—who confirmed that yes, I had to go in and see what the obstacle was.  After feeling with just my fingers, all I could find was a nose. Normal birthing position is feet first, nose afterward.  I had to reposition the kid, whose head was presenting without legs.  It took a while, but finally got one front leg pulled forward.  I just couldn’t find the second, I wasn’t sure whether Ii was feeling his leg or the second kid’s, but by now poor Dolly was screaming so loud and pushing so hard, that I gently pulled that one leg to tilt the shoulders and she finally got him pushed out.  Less than 3 minutes later she stood, and the doeling followed, sliding easily onto the thick hay..  minutes after the first. I gave her 1M Arnica for the birth trauma. About 30 min later I followed that with  1M Aconite.  She was in shock, staring straight ahead, and didn’t want anything to do with her kids. She refused to   clean them off, or even sniff them, turning her back when I moved them in front of her. 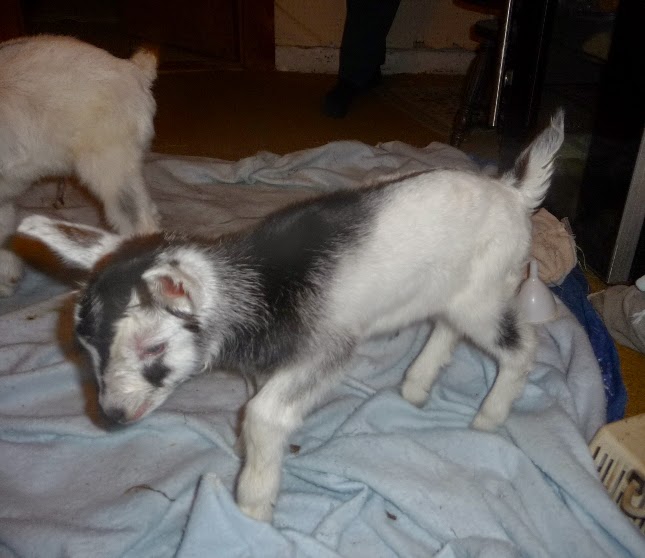 After an hour of her rejection, I milked her out to feed the colostrum. The  kids’ suck reflexes weren’t well developed, perhaps from being in the birth canal so long--2 hours or more.  I took them inside to feed them.  My friend Kim came over to help me tube them, but thankfully, that wasn’t necessary; instead, she showed me another technique that went a lot more quickly than what I’d been doing.  After 6 hours they had suck reflexes (thank goodness) and with the last bottle they each took about 3-1/2 oz.

When I returned to the barn, she had passed one placenta.  Hours later I was sure the other was retained.  Strain as she would, membranes dragging on the ground, nothing happened.  Membranes were hanging out  She wouldn’t eat, wouldn’t drink, didn’t want to be touched or handled in any way.

After giving 2 or 3 homeopathic remedies, I repertorized and Cantharis and Bellis were confirmed. I'd already given her Bellis with little result.  I gave her a handful of white willow bark for pain, about a cup of Raspberry leaf/Nettle/Squawvine tea (syringed it down her) to tone her uterus, and finally gave her a dose of homeopathic Cantharis to expel the placenta. Within 10 minutes of the Cantharis, she started to eat, walked over to her water, but only looked at it. Still, it was promising, the first time she’d shown any interest in water at all.  The next morning, her water bucket was down 3 inches, both kids were nursing and the placenta was passed and nowhere to be found, apparently eaten. Dolly was looking perky, swelling had gone down, she was making mil --which was pretty hard for her to do before since she wasn't drinking anything.  I’m sure the herbals helped, but the dramatic change after the Cantharis is what makes me love homeopathy.  When it’s the right remedy, there’s no doubt. 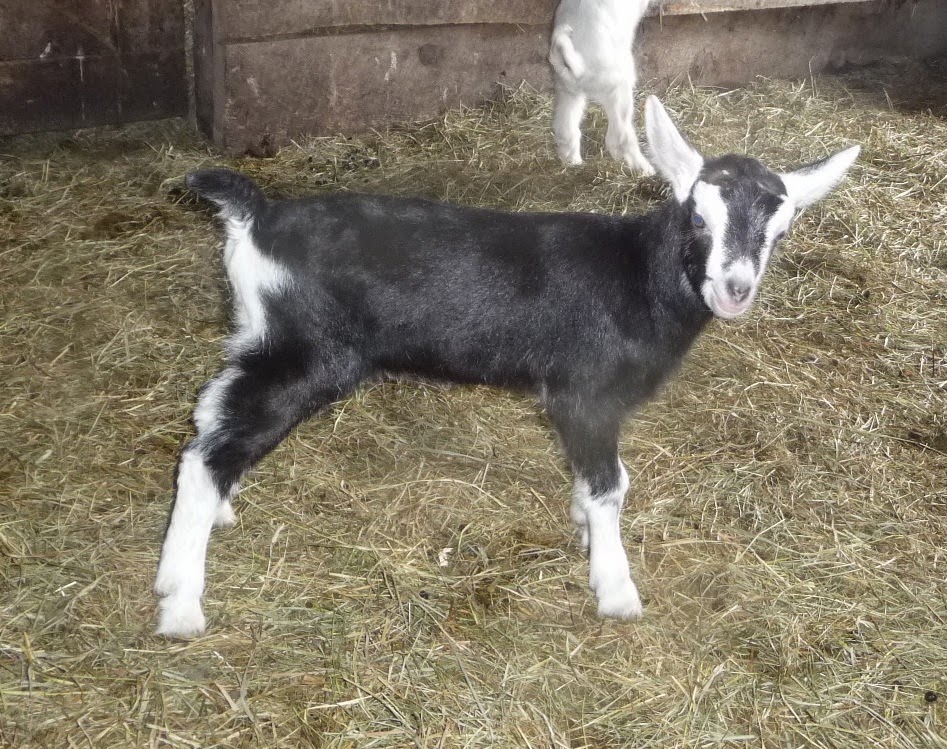 Cassie was the easiest of all. She had shown a little goo, but was not in any discomfort that I could see. Still, Shawn and I both kept an eye on her.  Not closely enough, though, as when we went out to treat Dolly, she had two bucks in the hay, one a sundgau, one black caped.  They weighed 7 lbs and 6 lbs respectively a few hours after birth.


She had them so quickly that it came as a complete surprise.  We arrived seconds after the second had been delivered, his foot still inside her.  Shawn had checked on her only an hour before, and I an hour before that, she didn’t show any signs of impending labor, but goats just live for the pleasure of doing their own thing. 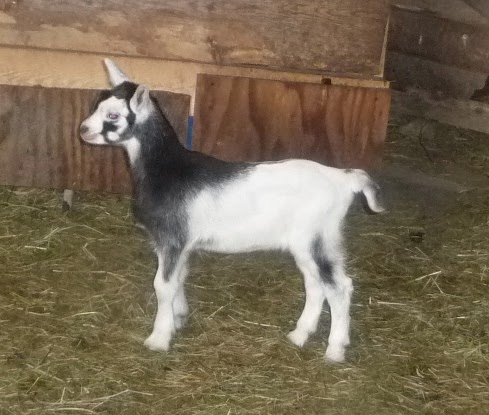 I stopped only long enough to towel the second kid and then let her take over again. Once she had completed that, she turned and started eating the placenta.  I let her.  In the wild, or with no one around, she’d do it anyway, and I thought, “Maybe she needs it.  Maybe it contains nutrients her body craves after kidding.”  Cassie’s a second time freshener, so I didn’t feel that I had to hold her hand, as it were, and she didn’t disappoint me.  I milked about 6 cups of colostrum after her kids nursed.  That went into the freezer for times of need.  Her kids got short shrift, though.  They had to wait for pictures.


So now kidding season is done for a while.   Beatrice and Leah aren’t due until May, so I have plenty of time to regroup and just enjoy these babies.
Posted by Joy Metcalf at 1:21 PM