Beatrice...or Stressful day(s) on the farm

Since Leah kidded early, Beatrice decided to delay a day.  Friday morning, her due date, her sides had sunk and her ligaments were soft, but she showed not the slightest inclination to stay in.  Fine.  Out she went.

Saturday morning, she still wanted out, but there was something in her actions...just a little something...that made me want to keep an eye on her.  Sometime midmorning, I laid out my clothes and towels to take a shower.  As I headed for the bathroom, I decided to take one last look at Beatrice, and get her into her stall.  I just wasn't comfortable with her being out and the gate closed to keep the others out of there.  I called her and she came and immediately went into the stall.  Now that's different; Beatrice likes to be outside.  I knew the time was approaching.  I watched her for a few minutes as she stood quietly looking back at me. I thought, "I have time to take a shower," and went back to the house.  I checked my email, busied myself with odds and ends for a few minutes...and headed back to the barn.

Again Bea stood looking back at me, but as I watched, she turned and looked at her side.  A few minutes later, she pawed the bedding.  11:00.  She walked around a bit, lay down, and did nothing.  A few minutes later she started to push, and soon there was a nose and two front hooves sticking out of her.  Whenever she got a contraction, she'd push, but barely.  After 45 minute, she was still walking around with a nose and two hooves sticking out. I gave her 3 doses of Caulophylum 30C, 5 minutes apart, and within 15 minutes of the first dose, she pushed the baby out.  Well...almost.  The kid was hanging down with its hips still caught inside her, and she wasn't pushing.  She kept turning and I was sure she was going to swing that kid against a wall!  I grabbed her collar to stop her swinging around, rotated my fingers around the kid's hips to see if there was a malplaced leg, and when all seemed fine, I grasped the kid (pretty hard to do when they're so slippery) and when the next contraction came, pulled it out and down.  Birth, finally!  And a doe!  Beatrice loves to have bucklings, so I was very happy, even it it isn't a Sable.

Yes, we whisked her away quickly, after toweling her off a bit.  I "bounced' Beatrice and it felt like there was another kid in there, so I left the rest of the cleaning up to my son when he carried her to the house, and watched to see what would happen.

Again, nothing.  I milked her out, hoping to stimulate further contractions.  One side of her udder was almost devoid of colostrum, and the other gave me only 1/2 gallon.  Not good.  This doe usually freshens with a gallon or more.

After an hour I called my vet.  The second kid should have appeared by now.

I scrubbed my entire arm. grabbed hold of her collar with the other arm, and slowly inserted my fingers.  Nothing.  There are easier tasks than trying to put your hand  inside a goat's birthing canal while holding her with the other hand and trying to keep her still.  I finally just pinned her in a corner and against a wall.  The goo from her last kid was the lubricant, and I made sure I smeared it all over as I went in.  All the way to my wrist.  A little farther. I felt..something squishy.  I felt around a bit more.  Nope, no limbs, no head, nothing hard that would indicate another kid.  Must be just the placenta.  I extracted my hand, disappointed.

Shawn left and came back.  When he came into the house, he said, "I think you need to come in the barn.  I think she's having another kid.  I swear I saw something that looked like hooves and nose."
"Can't be," I replied.  "I felt around in there. There was nothing solid, just soft and squooshy."
"Come and look anyway," he said. " I saw a red bubble."

Now I was sure it was the afterbirth, and when we got out there, a small red sack was hanging from  her.  I saw nothing else, and neither did he.  I did not check closer, silly me.  "Well," said he, "maybe I was mistaken."  He left again,, taking my car to repair the struts.  I took the new doeling and put her in with Leah's two kids. 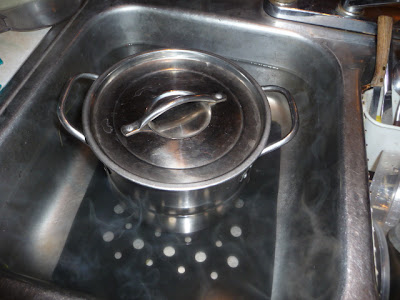 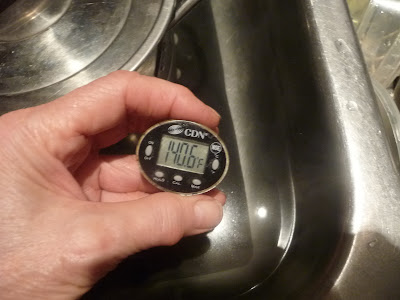 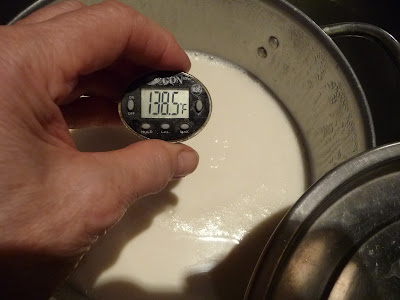 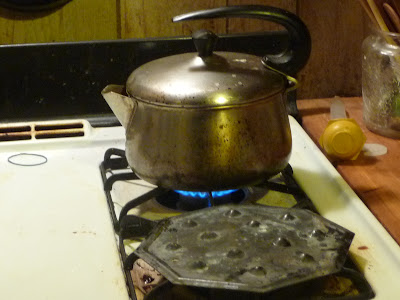 When I finished, I went to the barn to see if she'd passed the afterbirth yet.  There in the hay stood a kid, wobbling on its new legs, still damp, and Beatrice licking the placenta.  I figure the kid, another doe!--had been born between 3:30 and 4:00, and most probably within the last 15 minutes.  I covered her with a towel and whisked her off to the house.  After a few minutes, she greedily took some colostrum and once she was almost dry, I left her with the brood.

Is there anything cuter than newborn kids? They stumbled and semi-hopped over to greet the newcomer.  Later when I went to feed them, they were all piled in the corner together. 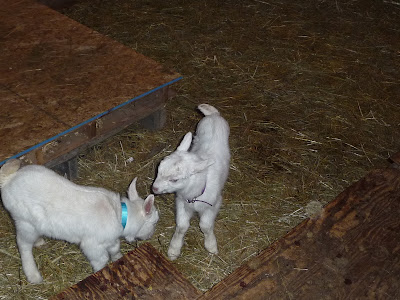 The next morning I was up at 6:00, hoping to get kids fed, does milked, shower, and out the door by 9:00.  It didn't happen.  Violet is not an easy milker.  She stands quietly, but her teats are so small that it takes forever to milk her.  First there was the heating of the colostrum for the newborns and milk for the older kids, out to feed,  milk three does, warm packs on Leah for her udder edema, feed the horses and poultry...

Oh, forget it!  I let all the Guineas and Silkies out.  It was a beautiful day, they'd been in for weeks, and the snow was gone.  Let them fend for themselves today!

My sister and brother-in-law showed up to say Happy Easter to my mother, and Laura and I headed out to the barn so she could see the new kids.  Two in the corner piled up, one sleeping on the tall pallet, and ... the fourth was missing. I checked to see if she could have wedged her way under the door.  Nope.  We walked around and looked at the pallets lying one on top of the other, and little entryways into the innards.  Laura took one end, and I took the other, and we gently lifted it and moved it off the bottom pallets.  A little, dirty-faced goating looked up and mewled.  I lifted her oh-so-tenderly and carefully out of there, felt to assure that she was okay, and set her down on wobbly legs with the others, then we put back the top pallet...and filled every place of ingress with bunches of hay.  The nice thing about that hay sticking out is it gives the kids easy access to start nibbling.  There's a bright side to everything.
Posted by Joy Metcalf at 10:52 PM